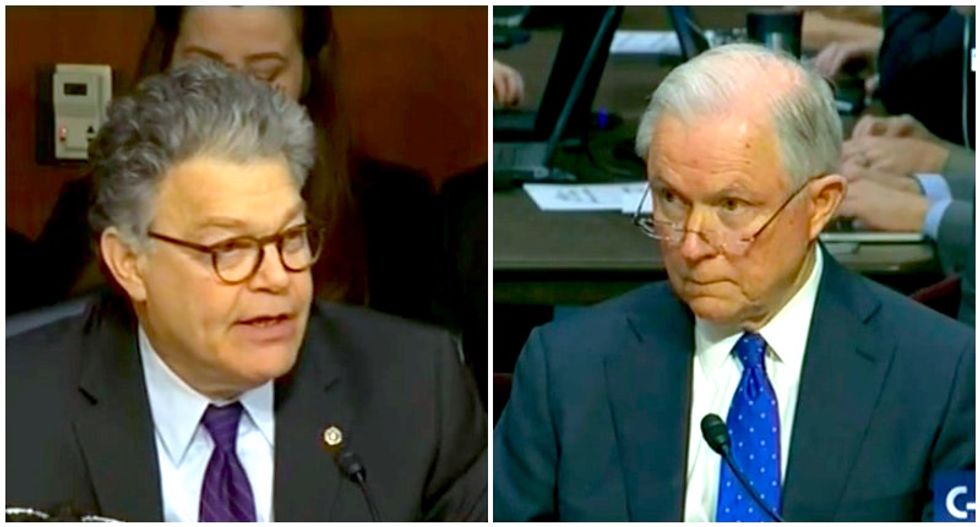 A guilty plea signed last month by one of his former Trump campaign underlings revealed this week shows he likely perjured himself during his confirmation hearing -- and he doesn't have a good option to wriggle out of it.

Sessions told Sen. Al Franken (D-MN) at the January hearing that he was "not aware" of evidence that anyone affiliated with the Trump campaign communicated with the Russian government during the campaign, according to the New Republic.

He walked back those claims last month during another Senate hearing, telling Franken he "conducted no improper discussions with Russians at any time regarding the campaign or any other item facing this country."

But court filings, and a new CNN report, show he was aware of evidence that at least one campaign associate was in contact with Russia.

George Papadopoulos, who served on the foreign policy advisory committee that Sessions oversaw, pleaded guilty Oct. 5 to lying to FBI agents in January and February.

The guilty plea Papadopoulos signed shows the campaign adviser communicated with Russians promising stolen campaign information on Hillary Clinton, and he tried repeatedly to set up meetings between the Trump campaign and Russia.

Papadopoulos told other committee members, and Trump himself, about his contacts with Russia during a March 31, 2016, meeting -- and proposed arranging for the Republican candidate to meet with Russian president Vladimir Putin.

According to a CNN report Wednesday, Trump "didn't say yes and he didn't say no."

But Sessions, then an Alabama senator and chairman of his national security team, shut down the proposal, according to one person present for the meeting and confirmed by another source.

The guilty plea shows Papadopoulos continued trying to arrange a meeting between campaign officials and Russia until at least August 2016.

J.D. Gordon, a former Pentagon spokesman and Trump campaign national security adviser who attended the meeting, told CNN that Papadopoulos "obviously went to great lengths to go around me and Sen. Sessions."

"The good news for Sessions is that he can plausibly claim to have opposed any Russian collusion," writes the New Republic's Jeet Heer. "The bad news is that, in making those claims, he opens himself up to charges of perjury."