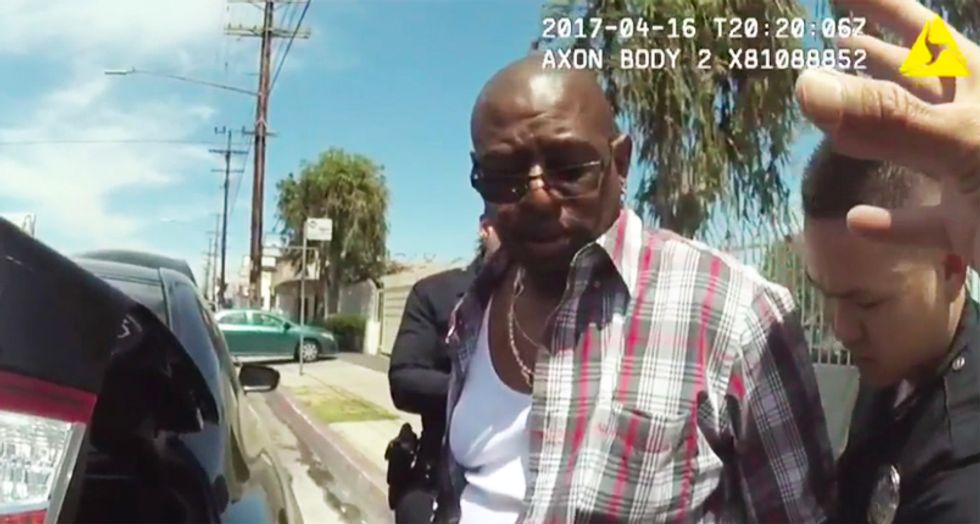 An investigation into what is being captured on the body cams worn by Los Angeles police has turned up evidence of officers planting drugs in a suspect's wallet while believing their cameras were off.

According to CBS-LA, Los Angeles police are now wearing the body cams, but police officials are withholding the videos from the public. However, the station was able to acquire video of one black man being arrested for a hit and run, with the video showing something quite different from what was documented in the official police report.

The report documents the arrest of Ronald Shields, 52, in April when he was taken into custody for a hit and run. According to the police report, LAPD officer Samuel Lee stated that cocaine was found in Shields' front left pocket

But the body cam of a fellow officer showed one officer picking up the small packet from the ground and placing it in the suspect's wallet -- before making a show of discovering it multiple times for the camera.

According Shields' attorney, Steve Levine, officer Lee seemed stunned when he was shown the video while on the witness stand, saying the officer, "Looked dumbstruck to me. Period. He had really no answer.”

According to an expert discussing how the body cams work, the officer may not have realized that the camera was running 30 seconds before he believed he activated it.

Confronted by CBS reporter David Goldstein, both officers involved in the bust refused to comments on the discrepancy between their reports and what was shown on-camera.

Watch the video below via CBS-LA: