‘Consider the source’: Ex-intel heads Brennan and Clapper smack down Trump for calling them ‘political hacks’ 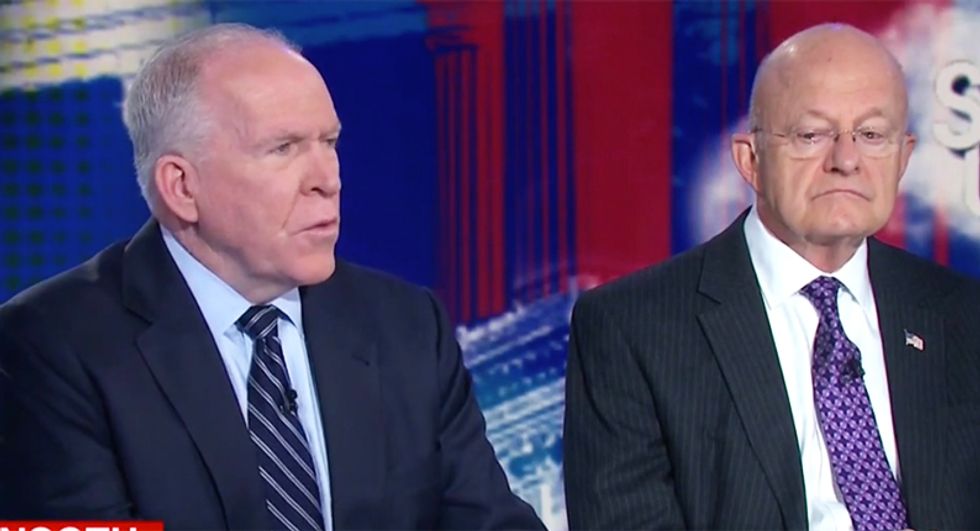 Appearing on CNN's State of the Union, former CIA head John Brennan and ex-Defense Intelligence Agency Director James Clapper fired back at President Donald Trump for calling them "political hacks" because they believe the intelligence community's assessment that Russians meddled in the 2016 election.

"The president called the both of you and [former] FBI Director James Comey political hacks," Tapper stated. "All three of you worked in senior levels in the Obama administration. although you also worked during the Bush administration. How do you respond to the charge?"

"First of all, he was referring to us as political hacks because he was trying to delegitimize the assessment done. We did not write that assessment," Brennan shot back. "It was written by the professional intelligence officers and law enforcement officers of this great country. Secondly, I feel very honored to be associated with Jim Clapper and Jim Comey in the same category. And considering the source of the criticism, I consider that criticism a badge of honor."

"Third, I found it particularly reprehensible that on Veterans Day that Donald Trump would attack and impugn the integrity and the uniform of those who wore it for 35 years. Who responded to the call of his country to go to Vietnam, flew in over 70 combat support missions over Vietnam," Brennan continued. " And like Senator McCain, really did put his life at risk because of this country's national security. And to impugn Jim Clapper on Veterans Day, who has dedicated so much of his life to this country, I just find that outrageous, and I think it's something Mr. Trump should be ashamed of, but it doesn't seem as though in anything he does he feels any shame whatsoever."