Conway snaps at Fox & Friends for asking about Roy Moore: 'Trump will make a statement when he wants to' 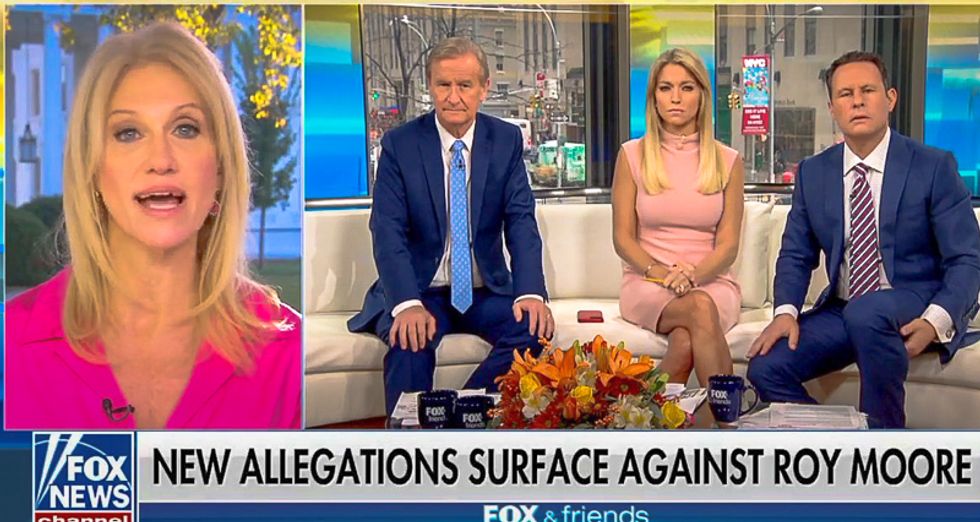 Counselor to the president Kellyanne Conway on Thursday admonished the hosts of Fox & Friends for pressing President Donald Trump to respond to the sexual abuse allegations against Alabama GOP Senate candidate Roy Moore.

During an interview on the Fox News morning show, host Ainsley Earhardt noted that Ivanka Trump had sided with the victims but her father had yet to condemn Moore's alleged pursuit of underage girls.

"He's been very busy here working," Conway replied, adding that she had been "the first person in the administration" to speak out on behalf of victims of sexual assault.

"I tried to make this an issue over a year ago on October 9, 2016, when I talked about, maybe when I was younger and prettier, folks on Capitol Hill behaving in such a way that we should take a look at it," she continued, deflecting the original question. "Nobody wanted to listen to me because of the campaign I was managing."

Co-host Steve Doocy pressed Conway: "It sounds very clear that [Senate Majority Leader Mitch McConnell (R-KY)] would like perhaps Jeff Sessions to get out of his chair as the Attorney General and go back to his old chair in the U.S. Senate."

"That certainly has been raised," Conway stuttered. "But again, the president will make a statement when he wants to make a statement. And none of us should get ahead of that."

"I do find that the mainstream media want to talk about this issue more than almost anything else," Conway remarked. "And again, we're not telling Americans what's in the tax plan for them. If this is just going to be a war of soundbites then the tax plan will not be as successful."

"I'm sorry," the president's aide snapped. "I think it's incumbent upon everyone who has a role and a responsibility to inform people what's going on on Capitol Hill to tell them what's in this plan."