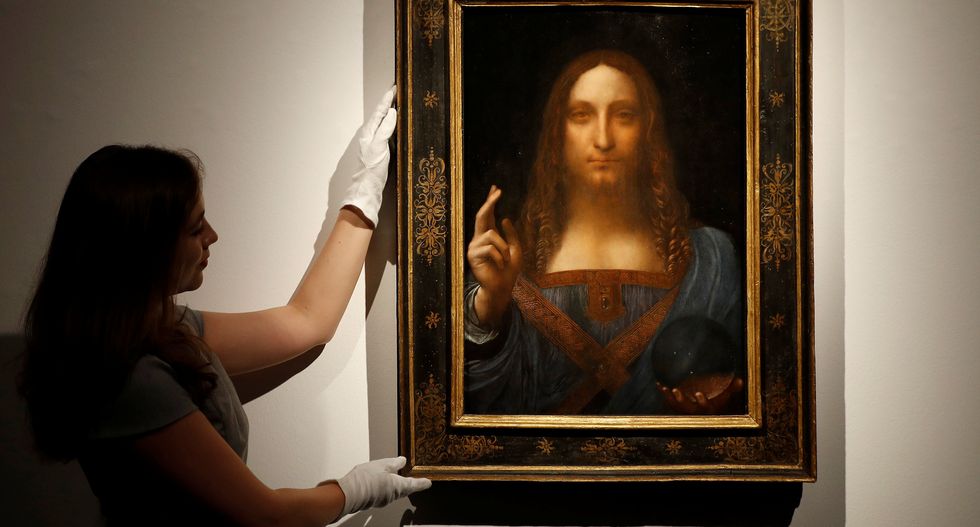 FILE PHOTO: Members of Christie's staff pose for pictures next to Leonardo da Vinci's "Salvator Mundi" painting which will be auctioned by Christie's in New York in November, in London, Britain October 24, 2017. REUTERS/Peter Nicholls

NEW YORK (Reuters) - Leonardo da Vinci's portrait of Christ "Salvator Mundi" sold for a record-smashing $450.3 million on Wednesday at Christie's in New York -- more than double the old mark for any work of art at auction.

The painting, which once sold for a mere $125, was only recently rediscovered. It was the last da Vinci left in private hands and fetched more than four times the Christie's pre-sale estimate of about $100 million.

The price was more than twice the old record for any work of art, set by Picasso's "Les Femmes D'Alger," which sold for $179.4 million in May 2015.

"Salvator Mundi" (Savior of the World) was purchased by an unidentified buyer bidding via telephone after a protracted bidding war that stretched to nearly 20 minutes at the New York auction house.

The restored portrait, an ethereal depiction of Jesus Christ which dates to about 1500, is one of fewer than 20 paintings by the Renaissance artist known to still exist.

First recorded in the private collection of King Charles I, the work was auctioned in 1763 before vanishing until 1900, by which time Christ's face and hair had been painted over -- once a "quite common" practice, according to Alan Wintermute, Christie's senior specialist for Old Master paintings.

The new owner started the restoration process, and after some six years of research it was authenticated as da Vinci's more than 500-year-old masterpiece, which culminated in a high-profile exhibition at London's National Gallery in 2011.

Christie's did not identify the seller other than to say it was a European private collector who acquired the work after its rediscovery in 2005 and lengthy restoration.

But media reports identified him as Russian billionaire Dmitry Rybolovlev, who paid $127.5 million in 2013 in a private sale.

The painting stands as the first discovery of a da Vinci painting since 1909.