Did Carter Page just confirm some key details from the Steele dossier? 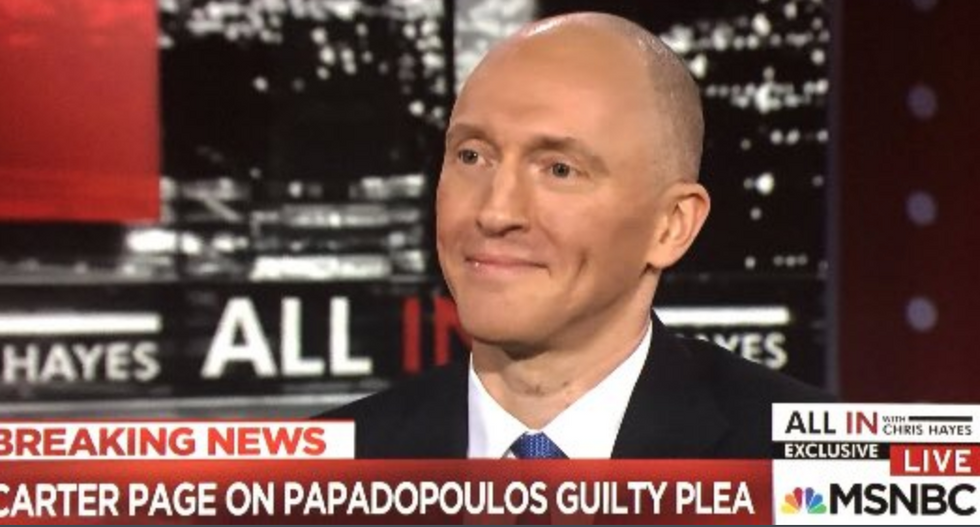 Carter Page "foams at the mouth"

Carter Page's bizarre testimony before the House Intelligence Committee supported some key elements of the infamous dossier compiled by a former British spy.

The former foreign policy advisor to the Trump campaign told lawmakers last week about his visits to Russia before and after the election, when he met with government and business leaders, reported Business Insider.

Page confirmed he had emailed campaign adviser J.D. Gordon July 8, 2016, from Moscow -- on a trip approved by former campaign manager Corey Lewandowski -- to say he had gotten "incredible insights and outreach from a few Russian legislators and senior members of the presidential administration here."

That seems to confirm findings by former British spy Christopher Steele, who reported in his dossier that "official close to Presidential Administration Head, S. Ivanov, confided in a compatriot that a senior colleague in the Internal Political Department of the PA, Divyekin (nfd) also had met secretly with Page on his recent visit."

According to Steele's source, Diveykin told Page the Kremlin had damaging information on Hillary Clinton that they wanted to turn over to the Trump campaign.

Page denied meeting with Diveykin and told the committee that "senior members of the presidential administration," as described in his email, was actually just a brief chat with deputy Prime Minister Arkadiy Dvorkovich.

He also claimed his reference to legislators meant only a few people shaking his hands in passing during the trip.

Page also confirmed that he "possibly" had contacted the head of investor relations at the Russian oil company Rosneft in advance of his July 2016 visit.

Rep. Adam Schiff (D-CA), the committee's ranking Democrat, pointed out that Rosneft's CEO, Igor Sechin, was under U.S. sanctions as part of the Magnitsky Act.

A U.S. intelligence source claimed in September 2016 that Page met with Sechin, who raised the issue of lifting those sanctions after the election.

A Russian source told Steele that Sechin and Page held a secret meeting to discuss "the issues of future bilateral energy cooperation and prospects for an associated move to lift Ukraine-related western sanctions against Russia."

Steele alleged that Sechin offered Page the brokerage of a 19 percent stake in Rosneft in exchange for getting U.S. sanctions lifted against oligarchs close to Russian president Vladmir Putin.

that Andrey Baranov, the head of investor relations, "may have briefly mentioned" the sale of a significant percentage of Rosneft in July.

A 19.5 percent stake in Rosneft changed hands in December under mysterious circumstances, and Page returned to Moscow the day after the deal was signed to meet with "some top managers" at the company.

He has denied meeting with Sechin while there, but agrees it would have been "a great honor."