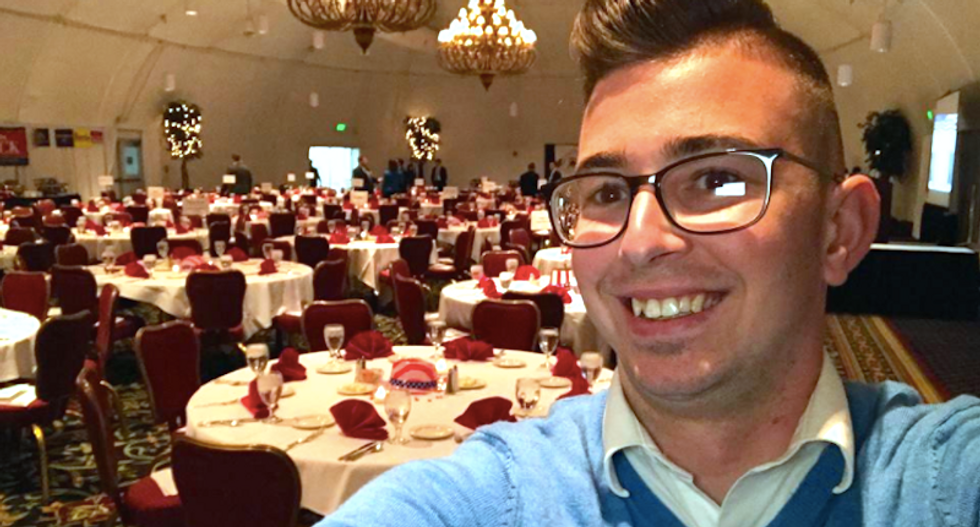 An Indiana Republican fired a staffer over his ties to a white supremacist group that endorsed Alabama Senate candidate Roy Moore.

Caleb Christopher Shumaker had his racist ties exposed Tuesday, after Moore touted the endorsement of the Indiana First PAC he chairs, reported the Indianapolis Star.

Moore used the endorsement as a show of national support after multiple women have accused him of molesting them or pursuing them for sex decades ago, when they were teenagers and he was an assistant prosecutor in his 30s.

The 25-year-old Shumaker discounted those accusations, and he promised 30 millennial-age volunteers would make phone calls on behalf of Moore before the Dec. 12 election.

The endorsement sent reporters scrambling to learn more about Indiana First PAC and Shumaker, who turns out to have been involved with the National Youth Front, which was founded as the youth wing of the white nationalist American Freedom Party.

It's not clear whether Moore knew of that association, but Shumaker was fired Wednesday by the Senate campaign for Mike Braun, an Indiana Republican.

"Once we became aware of Mr. Shumaker’s past comments and associations, his contract was terminated immediately," said campaign adviser Barney Keller. "Mike Braun strongly and unequivocally condemns Mr. Shumaker’s disgusting beliefs and believes they have no place in American politics.”

Shumaker, who served last year as the Indiana state director of Millennials for Ted Cruz, told the Star he didn't initially realize the National Youth Front was a white supremacist organization and claims he ended his involvement after less than a month.

In fact, Shumaker served as first chairman of the group, which was aimed at college students and is tied to three white supremacists who turned up as Trump supporters during the campaign -- California lawyer William Johnson, anti-Semitic ex-professor Kevin MacDonald and James Edwards, host of the Political Cesspool radio program.

Shumaker stepped down as chairman in January 2015, after other National Youth Front members forced him out over his interracial marriage.

A few weeks before his ouster, Shumaker produced a plainly racist video for the group, writing and reading a script that warned of "a failed utopian social experiment of massive immigration and multiculturalism."

The Braun campaign claims no knowledge of Shumaker's white supremacist past, which is easily found in an online search -- but he uses a different name now that he's involved in mainstream Republican politics, where he's known as Caleb Christopher.

Shumaker acknowledged to the Star that his full name is Caleb Christopher Shumaker, and that he's used two names in public life.

Indiana First PAC loudly proclaims to support the Trump coalition in next year's midterm elections, but the only other candidate the group has endorsed is Indiana Rep. Jim Banks, whose chief of staff disavowed the backing.

"The congressman has never met with this organization and didn't seek its endorsement," his chief of staff, Matt Lahr, told the newspaper. "We are trying to learn more about who they are. Congressman Banks believes that regardless of our political differences, Hoosiers must reject hatred and racism."