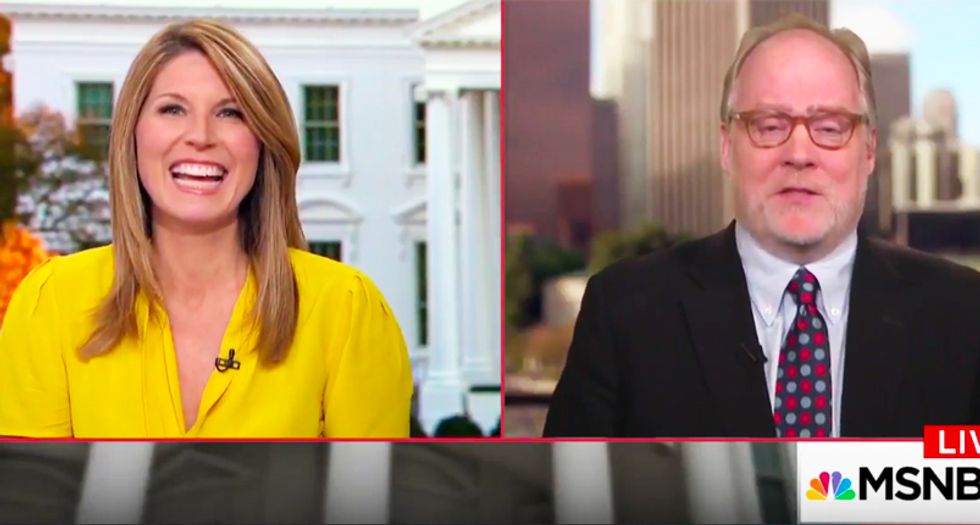 A political consultant whose client list has ranged from John McCain to Mitt Romney marveled at President Donald Trump's inability to keep from tweeting about inconsequential topics, and compared him to a poo-throwing money in the zoo.

Wallace began by laughing as she read "some of my favorite" presidential tweets from the past weekend, adding as she finished, "I need my high school grammar teacher to diagram those sentences."

"Help me out here," she asked Murphy. "Throw me a lifeline. What did I just read? They don't even sound real."

"It's just raging thumbs on a keyboard, it's like therapy," Murphy smirked.

"Do you blame the thumbs?" a laughing Wallace asked.

"No, I blame him," Murphy explained. "It's just this is -- look, I totally blame him. The only suspicion I have is there's an amplifier effect because some of these tweets apparently he dictates to Hope [Hicks] or his social media guy and, I think, on the phone when they're in the room because he wants to impress them."

"'I'll show them, tell them this, tell them that,'" Murphy said mimicking Trump. "It just amplifies itself and it's crazy. It's like going to the monkey house at the zoo. you make eye contact with them too long and he throws the feces at you. Twitter is his weapon of choice."

Axios founder Jim VandeHei later chimed in to add, "You can ignore him, you can. We can actively choose on the weekend to ignore him. when he's alone with his tweeter. He's just going to say absurd things -- call Hillary Names and go after anybody he has a grievance with so that we all get jazzed up about it. I'm not being critical of it, but nothing substantive happens. It's all rhetoric."