‘How can she look in the mirror?’ MSNBC’s Mika calls out Sarah Sanders for ‘sick’ defense of Trump bigotry 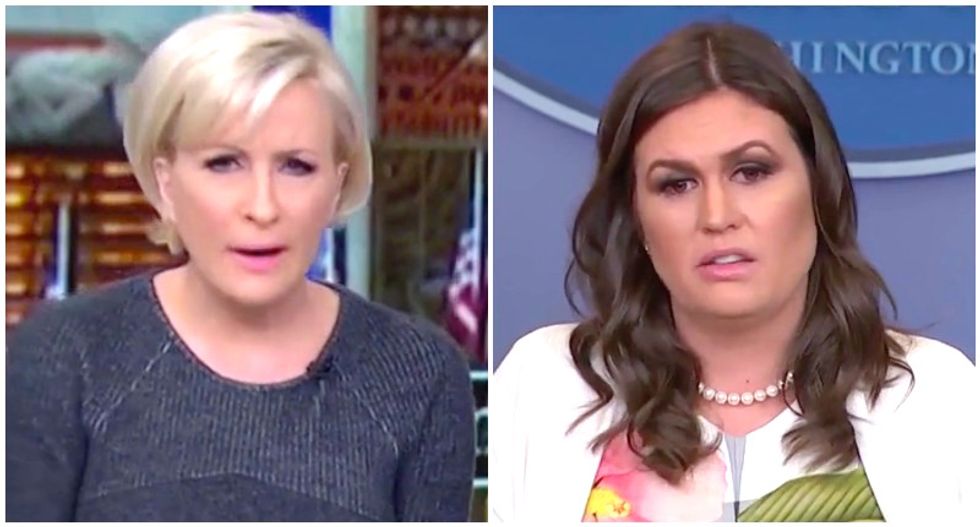 President Donald Trump was unable to stop himself from uttering a racial slur against Native Americans during a ceremony Monday honoring Navajo code talkers -- and his White House press secretary justified his remarks.

"When is there going to be a moment where she says the president misspoke?" Brzezinski said. "What's wrong with her? Why does she do that job? How can she look in the mirror every day and say, 'I am doing the right thing for the American people?' Because you are not -- you are not. This is Kellyanne Conway territory. This is horrible."

Sanders justified the "Pocahontas" slur against Sen. Elizabeth Warren (D-MA) by arguing her claim of Cherokee ancestry as false, scandalous and under-reported -- but Brzezinski said there was no excuse for insulting World War II heroes.

"That is unbelievable," she said. "This is our president and that is the spokesperson for the president of the United States sitting there, defending his racism, his bigoted language, his stupidity. This is where we are."

Brzezinski said the press secretary, like others in the White House, had sworn a loyalty oath to the president.

Brzezinski returned to the loyalty oath later in the segment, saying other women serving under Trump had sworn fealty to the president.

"I cannot watch a woman do out there and shill for this president and shill for his racism and bigotry," she said. "It is so painful. We do not need this."