‘I’m strong’: Virginia student stands up to Bible-thumping candidate who singled him out in anti-LGBT ad 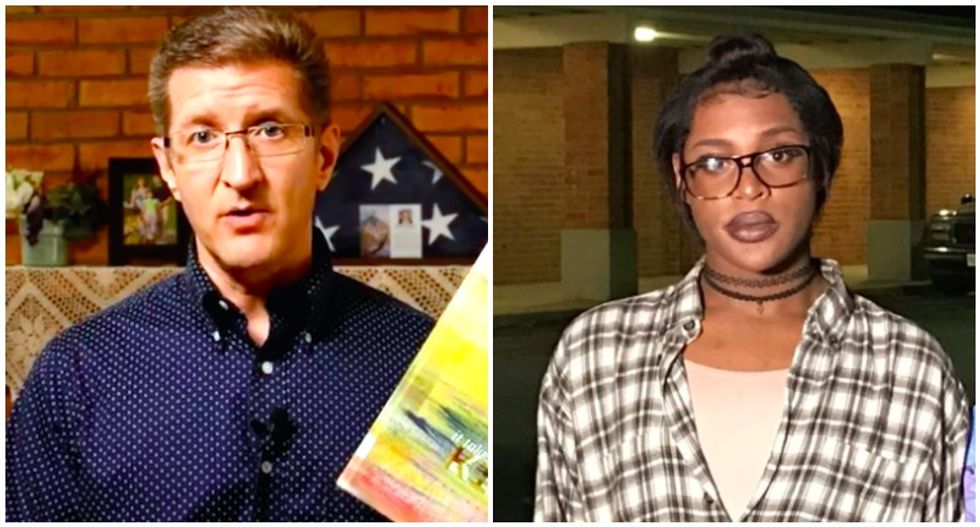 A Virginia school board candidate singled out a gender-fluid student in a campaign video posted on Facebook.

John Kinchen, an associate dean in the School of Music at Liberty University, wants the school board to adopt a formal policy banning any restroom accommodations for transgender students instead of informally be allowed to use individual unisex bathrooms, reported The News & Advance.

Other candidates for the Campbell County School Board are split over the issue, and some question whether it's necessary to debate during the campaign.

“When it comes to the transgender thing, most people not only don’t understand it," Kinchen told the newspaper, "they’re not supportive of this position and trying to accommodate a minority, to give special privileges and special rights to people."

Kinchen insists it's an important local issue in a Facebook video that has sparked a backlash among students and others in the community, reported WSET-TV.

In the social media video, Kinchen holds up a copy of the school yearbook -- which shows a multi-colored cover -- as evidence that public school students were being forced to accept LGBT people.

"On pages 18 and 19, one student was highlighted for staying true to himself," Kinchen warns. "This means wearing makeup and dressing in feminine clothing."

The candidate quotes the student, who urges others to be more open-minded and accepting.

"Acceptance has become a code word for what is sought by liberal activists," Kinchen says. "The leaders in this school should have given more guidance to this publication."

Kinchen never identifies the student by name, but Mikel Jenkins spoke to the TV station about being thrust into an election campaign by an adult.

"I like to wear makeup, I identify myself as a male," said the sophomore, who said he was confident enough to handle the spotlight. "I'm glad it was me, because I'm accepting of myself and I'm strong."

"We don't have to agree with the decisions that they've made, but in that same process, we are here to support all of those children," Rypkema said.

The current editor-in-chief of Brookville High School's yearbook, "The Buzzer," posted a video response to Kinchen on Facebook.

"Our yearbook is allowed freedom of speech, and I will allow no one to take that away," said Madison Sims, the editor. "Along with that, I will not tolerate anyone putting down a person that they do not know, simply for their beliefs."

Another yearbook staffer said she was heartbroken their profile on Jenkins caused him to be singled out by the religious conservative candidate.

"The school loved his story," said student Emily Johnson. "We got such positive feedback on the book, because we showed that 'it takes all kinds,' which really meant for us that these 'kinds' all work together to make a unique and diverse school environment -- which is what people should strive for in the first place."