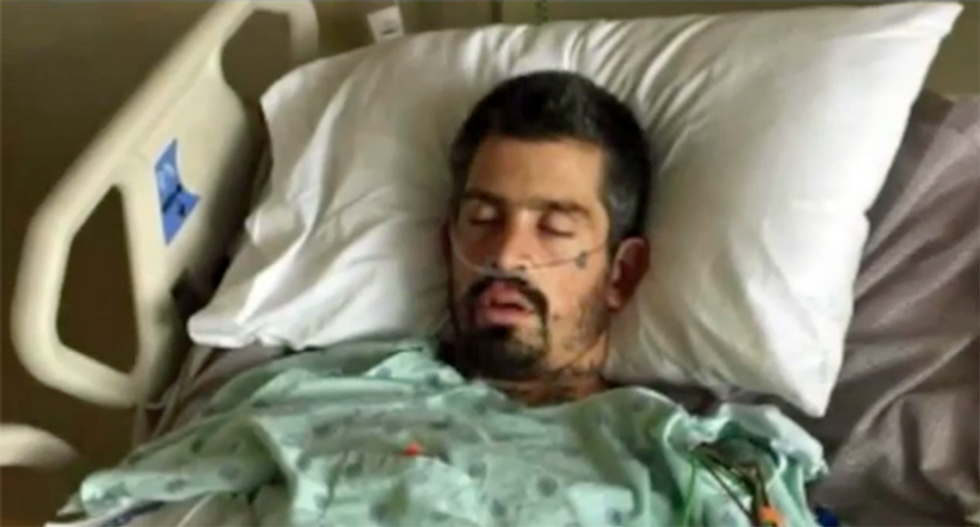 John Hernandez was hospitalized following a March encounter with the Sacramento Police Department.

A disabled northern California man finds himself behind bars only days after filing a civil rights lawsuit against excessive force by police that allegedly caused his brain damage.

John Hernandez is "totally disabled" and has trouble speaking. He has only recently relearned how to walk again. Hernandez and his mother gave a heart-wrenching interview with Fox 40 in Sacramento on Tuesday.

"In a situation where we have a person that is likely to run, we have a responsibility to not only establish containment around the residence, but also have sufficient officers to search a residence and affect an arrest inside," Tracy Police Department Lt. Tony Matuska said of the six officers sent to apprehend Hernandez.

"John can’t run, doesn’t know how. Not anymore," his mother said. "He used to be a really good runner, but John had to learn how to walk and talk all over again."

The Tracy Police Department claimed the call to arrest Hernandez came from Placer County, though his outstanding warrants are from Sacramento, Manteca and El Dorado counties. Fox 40 was unable to reach the Placer County District Attorney's office to inquire about the arrest.

Now Hernandez is behind bars with a scheduled court appearance Monday in Manteca County.

Video from a police cruiser documented the initial encounter, where Hernandez is simply sitting on the curb.

The victim had a long history of drug abuse, but had no record of violent crime. Hernandez ran from police, seeking sanctuary inside a medical center. Surveillance video of the lobby showed Hernandez running inside to an elevator and also captured video of a large group of police leaving the lobby later with Hernandez on a stretcher.

According to the lawsuit, four officers smothered Hernandez, depriving him of oxygen for 10 minutes. The lawsuit also cited repeated Taser and baton strikes.

The lawsuit alleged an "entrenched culture and posture of deliberate indifference toward protecting citizen’s rights.”

Hernandez told Fox 40 on Tuesday that he sometimes wishes police would have used even more force and killed him.

"They didn't though, you're a survivor, man," Fox 40 reporter Ben Deci replied during the Tuesday interview. "Good for you."

He was arrest two days later.