Internet blasts Don Trump Jr. for attacking gun control before Texas victims have even been identified 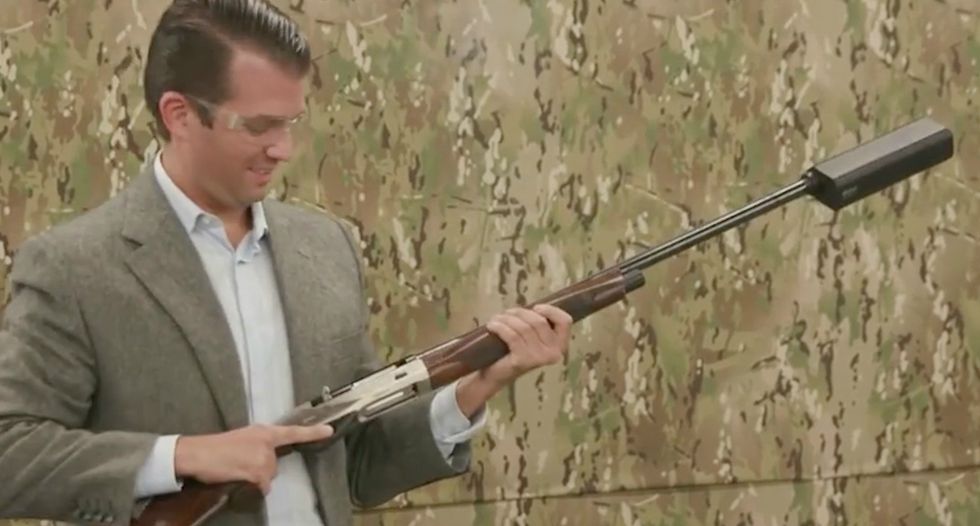 Donald Trump, Jr. in an advertisement for gun silencers (image via screengrab).

The son of President Donald Trump got a lesson in politicizing tragedy Monday morning after he came out against gun control less than 24 hours after a Texas man murdered 26 churchgoers and wounded 30 more with a high-powered assault weapon.

Long before police released the names of the victims shot by Devin Patrick Kelley, Don Trump Jr. attempted to alter the conversation away from America's gun policies that allow assault-type rifles to be easily sold over the counter -- even to those with a history of violence.

Without mentioning the name of Johnnie Langendorff, who confronted Kelley and exchanged fire with him, leading to a car chase, Trump tweeted: "Psycho w illegal gun kills many taken down my law abiding citizen w gun. Which one of these would be out of the equation w more gun control?"

The internet was quick to pounce on the president's son, who once promoted the idea of allowing gun silencers that would allow more children to take up shooting.

Psycho w illegal gun kills many taken down my law abiding citizen w gun. Which one of these would be out of the equation w more gun control?
— Donald Trump Jr. (@Donald Trump Jr.) 1509974406.0

@DonaldJTrumpJr "Shooter died of self inflicted wound" -- but whatever suits your narrative
— ᎠᏌNᎬᎷYᎢᎻᎪNᏩ™️ (@ᎠᏌNᎬᎷYᎢᎻᎪNᏩ™️) 1509980956.0