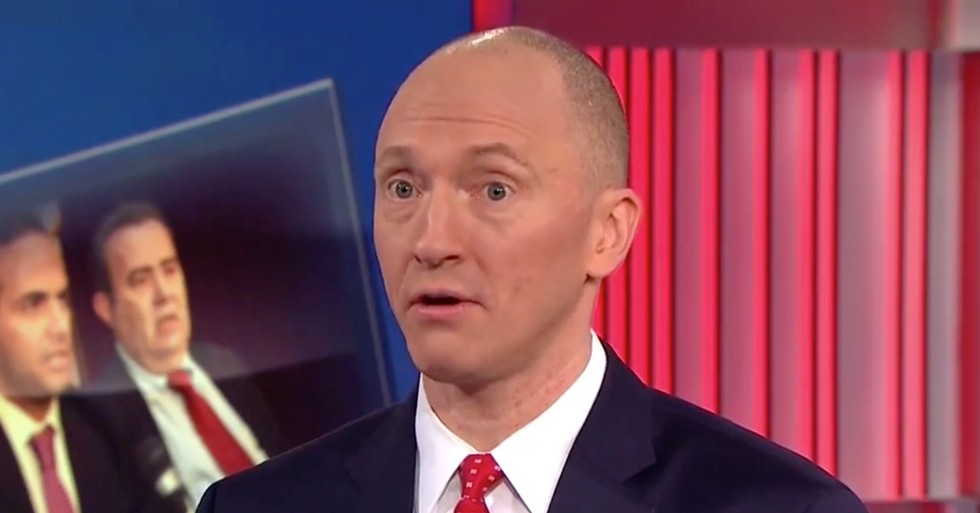 On Monday, the committee one-upped the zany adviser by releasing all 243 pages of his testimony transcripts -- and naturally, Twitter immediately pounced.

The Daily Beast's Sam Stein pointed out that Page's testimony shows that he informed his superiors on then-candidate Donald Trump's campaign about his July 2016 trip to Moscow -- a trip that's received scrutiny since it was revealed last week.

where Carter Page reveals he did inform the Trump campaign about his trip to Russia https://t.co/aUDEHTkeKG
— Sam Stein (@Sam Stein) 1510017146.0

CNN's Manu Raju -- himself the subject of a weird anecdote meant to illustrate the leakiness of Congress to his colleague Tapper -- noted that the transcripts show "Page suggested to campaign officials Trump go to Moscow; he told Hope Hicks, Corey Lewandowski and JD Gordon about his own Moscow trip."

Others still noticed parts of Page's testimony that, while less revelatory about his relationship to Russia, provide a strange portrait of the man whose news show performance last week cause one Twitter user to characterize him as a "malfunctioning droid."

Take, for example, Dr. Dena Grayson (the spouse of former Florida Democratic Rep. Alan Grayson and a popular Internet commentator), who noticed that Page's opening statement and self-biography took up 45 of the 243 pages of the transcript.

BuzzFeed's Chris Geidner, on the other hand, poked fun at his employer's headline style when discussing how "Adam Schiff Asking Carter Page Whether He's Invoking The Fifth Amendment Is Something Else."

Another Daily Beast reporter, Harry Siegel, noticed that Page both pleaded the Fifth and also insisted he'd done nothing wrong.

National security analyst Stephanie Carvin live-tweeted her reading of Flynn's testimony, pointing out the more outrageous bits are "like reading [ousted Trump adviser Sebastian] Gorka, and yet some how more stupid."

But perhaps the best take-away from the transcript came from Huffington Post's Washington Bureau Chief Amanda Terkel, who noted Page's interesting defense when asked why he took such a risky trip to Moscow.