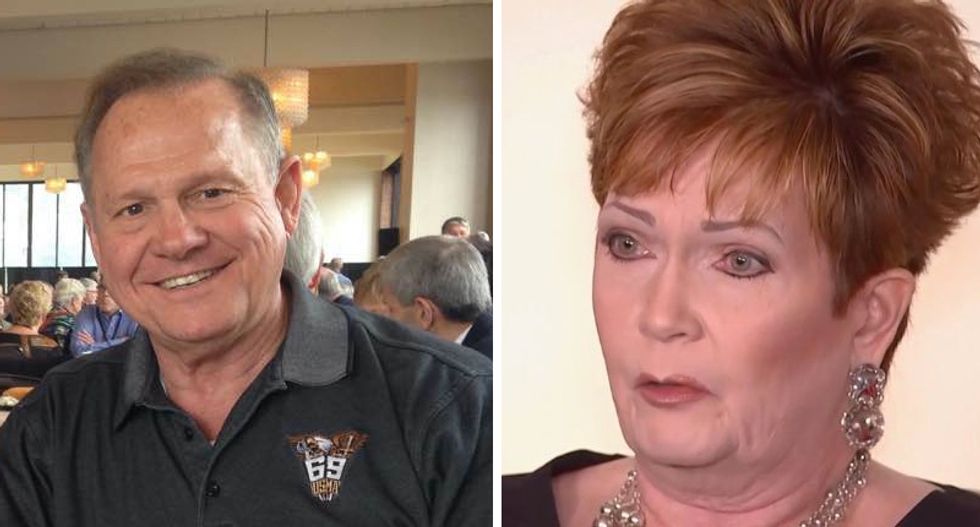 According to an expert in the intersection between religion and sex, the fact that evangelicals are flocking to support embattled Alabama Senate candidate Roy Moore should not come as any surprise, because maintaining "power" is at the center of their world.

In an Atlantic interview with Washington University in St. Louis professor Marie Griffith, author of  Moral Combat: How Sex Divided American Christians and Fractured American Politics, Griffith explained that Christians defending Moore over accusations that he sexually assaulted a 14-year-old when he was a 32-year-old lawyer isn't "hypocrisy" - it's how they see the world.

"I think what we’re seeing is an extreme politicization of Christianity. It almost does not feel like the evangelical tradition of a generation ago. I don’t want to overstate that, of course—there’s plenty that’s still evangelicalism. But it has become so focused on power," Griffith explained. "It looks like hypocrisy to the outside world. I’m not sure I quite see it as hypocrisy, but I do see it as a real politicization of the tradition."

Asked by interviewer Emma Green, "The women in Alabama who have accused Roy Moore are probably also fairly conservative, and might be Christians. Why are some claims doubted and systematically undermined by conservatives, even when they’re made by Christian women?" the professor explained that it is all about politics.

"Maybe it really does come down, even unconsciously, to politics. I hate to make people sound so calculating, but in some ways, that is what it seems," she began. "Those who were already supportive of Clarence Thomas were primed not to believe in any sort of moral failing. By the time [Anita] Hill’s story became public and widely known, there had already been great controversy over his nomination and very strong support coming from the conservative Christian world. There wasn’t a frame in that world except to disbelieve the story she told."

"On the other hand, with Paula Jones, when her story came to light, there was already tremendous hatred of Bill Clinton, and of Hillary Clinton, too, in those same conservative Christian circles. So they’re primed to believe a story from their hatred of him," she continued. "In some ways, we forget how primed we are, politically, to believe or disbelieve a story depending on who is telling it."

"How did sexual politics become so central to religious discourse in the United States? Why do we have such an obsession with sexual morality?" Griffith was asked.

"The Bible has things to say about sex. But for Jesus, in the New Testament, it’s not a major thing at all," she replied. "He’s far more concerned with feeding the poor and caring for those in need. When you look back over the last century of Christian argumentation and political concern, however, it’s had a lot more to do with sex than with caring for the poor."

"But the motivating concerns are sex, birth control, obscenity and censorship laws, sex education in public schools, and even abortion, which has a lot to do with sex and sexual morality," she continued. "I think it’s a lot about women and gender roles, and wanting to hold onto traditional gender norms. These battles have been fought over and over again on that territory, about conserving the home and traditional family values."

Griffith also said how women's "purity" is viewed has a lot to do with how evangelicals respond to accusations of sexual improprieties.

"Notions of purity have been very important for Christians throughout history, including sexual purity and virginity," she elaborated. "Men’s virginity has never been a deep subject of reflection. It comes up, kind of like, 'Yeah, yeah, men should be sexually pure, too.' But female virginity and purity has been such a strong theme, and a source of attraction in some way. There’s this desire for the sexually pure, girlish model of womanhood."

"When you think about the charges against Roy Moore, and instances of pedophilia in different contexts—not just Christian contexts by any stretch—I wonder how that desire for this kind of virginal girl gets twisted," she concluded.