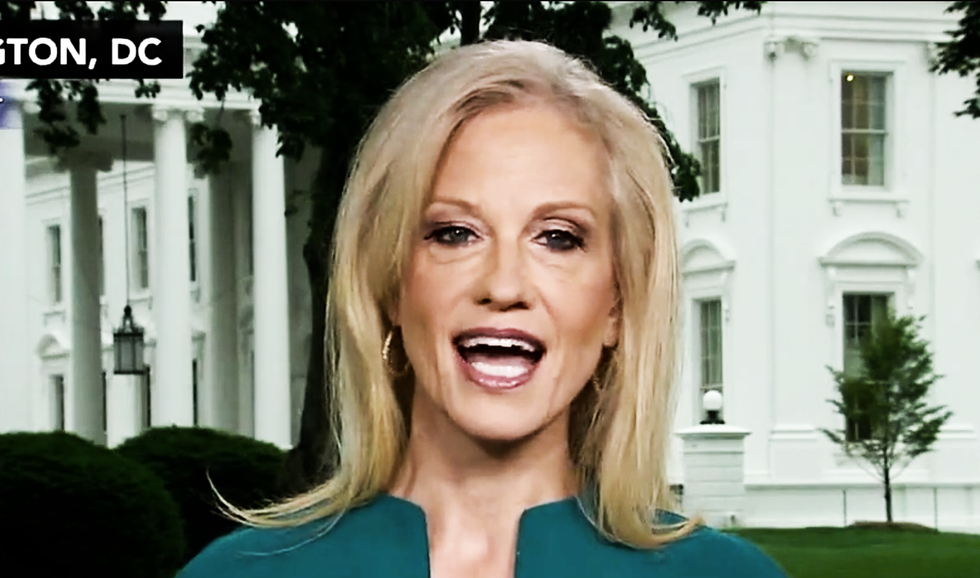 President Donald Trump's top advisor Kellyanne Conway appeared on "Fox & Friends" Monday to put increased pressure on Republicans to pass some form of meaningful legislation. For Trump, that means passing the GOP tax bill by the end of the year.

Conway swore that "petty partisan politics" would not get in the way of Republicans passing these tax cuts.

"But Kellyanne, partisan politics is getting in the way," Fox News host Steve Doocy said, going on to blame Democrats, who do not hold the majority in the House or the Senate.

Instead, the GOP is having problems shoring up its own party. Trump's tax bill would increase the deficit over $1.7 trillion and many right-wing Republican members pledged to their voters they would never add to the deficit.

Conway swore it was a "win for the people" and the lack of support was "too bad." In fact, the nonpartisan Congressional Budget Office has said that the vast majority of the tax relief would go to millionaires and billionaires.

"This is about the forgotten man and the forgotten woman," Conway said. She went on to say that this guts an intrusive and invasive government. "This is for them. This is not about giving the president a win. That's silly. He's the president. He won."

The president has failed to pass any of the legislation that he promised to pass "on day one" from repealing and replacing Obamacare to erecting the wall on the U.S. and Mexico border.

Fox then pivoted to Alabama Senate candidate Roy Moore, who faces multiple allegations that he sexually molested minors. Moore has denied the accounts and threatened to sue both the Washington Post and numerous Alabama newspapers. He has yet to file a lawsuit.

"Doug Jones in Alabama, folks, don't be fooled. He will be a vote against tax cuts," Conway continued. "He is weak on crime, Weak on borders. He is strong on raising your taxes. He is terrible for property owners--"

"I'm telling you that we want the voters in the Senate to get this tax bill through," Conway said. "And the media -- if the media were really concerned about all of these allegations, and if that's what this is truly about, and the Democrats, Al Franken would be on the ash heap of bygone half-funny comedians."

Kilmeade noted that the Republican Party has pulled their support as has Senate Leader Mitch McConnell (R-KY).

"Right. And you know what? I just want everybody to know Doug Jones, nobody ever says his name and pretends he is some kind of conservative Democrat in Alabama. He is not," Conway continued.

Doocy cut in to ask if Trump would be going down to Alabama to campaign for Moore. Conway said there are no plans to do it.