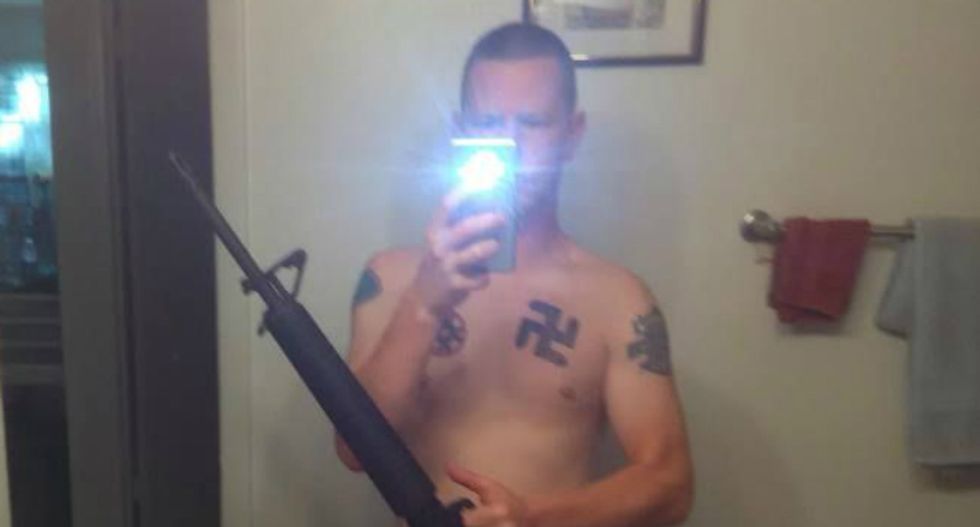 In late October, students at the University of North Florida discovered that one of their classmates is a Ku Klux Klan leader.

According to The Tab, the college-focused news site that first outed UNF junior/KKK Grand Dragon Ken Parker, the bigoted student has posted threats against his fellow students on social media -- and is now being investigated for it.

"I am WHITE and PROUD [sic], and these queer balls have yet to confront me on campus," Parker wrote on Facebook. When asked to clarify and whether or not he was threatening fellow students, he replied, "That is not a threat. It is a f*cking PROMISE!!!! [sic]."

It was then that he posted a now-deleted "topless selfie" of himself holding a rifle, with his swastika tattoo on full display.

"It is okay to be WHITE!!!!! [sic]," Parker wrote, echoing the phrase emblazoned upon flyers put up across the country.

"Let SDS [Students for a Democratic Society] and the other clowns come at me, I will shut them down," he continued, specifically referencing UNF's SDS chapter that have called on him to be reprimanded or expelled by the school since he was outed.

When asked by The Tab if they'd taken action, UNF President John Delaney claimed that although they "have taken immediate action," they could not disclose any punishment details based on the Family Educational Rights and Privacy Act that requires those records to remain confidential.

When the site contacted Parker, he said he'd not been punished by the school, and that they'd "launched an investigation" into him.

"Last time I checked, it wasn't against the law to post a picture online with a gun," Parker told The Tab. "I don't have it on campus."

On Tuesday night, UCF's student newspaper, The Spinnaker, revealed that Parker had been suspended. He told the student paper that he posted the photo of himself only to prove he was capable of self-defense, and not to threaten.

Texas Lt. Gov. Dan Patrick (R) this week blamed consumers who he suggested didn't "read the fine print" before being hit with massive energy bills during a recent winter storm.

In an interview on Fox News, Patrick responded to reports that consumers had seen bills as high as $17,000 to heat 900 square feet.

House Republicans opened an investigative hearing into the U.S. Postal Service by whining that embattled postmaster general Louis DeJoy was the victim of "insane, rabid" attacks.

The House Oversight Committee grilled former president Donald Trump's appointee about changes he made last year that led to widespread delays in delivery that complicated mail-in voting in a pandemic year -- but GOP lawmakers complained that Democrats were only trying to score cheap political points.

New York prosecutors are exhausting a substantial amount of resources for its investigative probe into former President Donald Trump's personal and business finances. Now, according to The Daily Beast, Trump's son, Don. Jr. and Allen Weisselberg described as "one of the former president's most trusted officers" are also said to be at the center of the prosecutors' investigation.

The publication reports that Trump Jr.'s role in the Trump Organization along with his active participation in his father's Make America Great Again (MAGA) campaign has made him a person of interest for prosecutors.