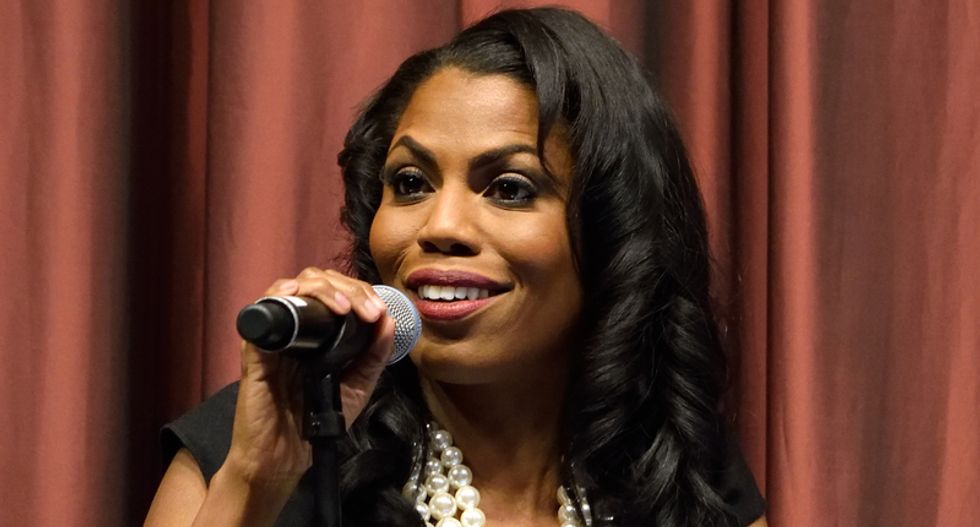 When it comes to Omarosa Manigault's role in the White House, no one is clear on it, including her.

In an interview with the Daily Beast, Elaina Plott asked the communications director for the Office of Public Liaison what her plate of issues were that she handled for President Donald Trump. He reply was simple: "Everything." Perhaps that is why she's making the highest recorded salary allowable for White House staffers at $179,700 annually.

Yet, when it comes to specifics, Manigault isn't exactly clear. What has become clear, is that the former winner of "The Apprentice" used her time to plan her wedding and hold a special luncheon for her wedding party at the White House.

“Her days are numbered, but Trump is trying to give her time to resign,” a source told the Daily News over a month ago. Yet, she perseveres. In the meantime, she's earned media attention for being the chief of chaos in the west wing.

When Plott sat down with Manigault in the Roosevelt Room moments before Steve Bannon was scheduled to bring a delegation from Egypt in the same room. “We’ll just be a few minutes," she said, in response to cautions against plopping down into a sofa with a reporter. The first of what was supposed to be a two-part interview was the day of the reported bridal party luncheon for her wedding party at the White House. She explained to Plott that it was "a very, very busy day." So, the interview turned into the reality TV star being "shadowed" by the reporter. “You can see me in action,” Manigault claimed.

While German Chancellor Angela Merkel was visiting the United States, Manigault was more focused on her April wedding. Still, shadowing the close Trump ally revealed her hard image was softened a little by shouts of “Hey, girl!” and “later, gator” to fellow colleagues. She is heavy with compliments for attire. "She orders grits and sausage from the mess, which, for reasons that remain unclear, we do not pick up, but instead sashay along to the next task."

When her fiance's name pops up on her phone, Manigault answers with a request to call back on her "secure line."

"At some point we are looking for a certain Josh, though we don’t ever locate him," Plott says of following Omarosa around the Eisenhower Executive Office Building. The reporter revealed she never found out why this "Josh" was needed. "As we knock on the door to one office, she finally muffles an answer as to what we’re doing: '…the faith communities, does anyone need to be blessed…'"

Answers begin and end with similar fragments of sentences strung together like magnetic poetry on the refrigerator of government. Yet, nothing could cover the stench of spoil inside. When a colleague asks if she's planning on doing "Dancing with the Stars," she confesses she can't due to a foot injury she endured jumping into a motorcade in January.

The second half of the interview never took place. Plott asked Republicans what their impressions were of the reality star's whirlwind morning.

“Wait, Hope [Hicks] let you follow [Omarosa] around?” one source asked Plott. Hicks wasn't chairing the communications office at the time. “So Sean [Spicer] let you?” Spicer wasn't leading the department then either. “Christ,” the source replied. “No one in the comms department knew a random reporter was walking around the West Wing. This is why people think we’re a sh*t show.”

Since Gen. John Kelly took over as Chief of Staff, there were rumors that Manigault was on the outs.

“Before Kelly, any right-wing extremist could barrel into the Oval Office and slap their personal manifesto on the boss’ desk to putrefy into government policy,” comedian Samantha Bee said during a September episode. “But no more—the V.I.P. room is now off limits.”

Plott revealed that she "learned little more than the fact that she was getting married," when searching for what exactly Manigault did all day. When asked if the White House funded the bridal luncheon, not even the White House knew details.

“I have no idea… I will try to track her down,” press secretary Sarah Huckabee Sanders responded when asked. Friday a senior White House official replied that the lunch never took place. "But did invite her bridesmaids to have lunch with her in the navy mess which all commissioned officers are allowed to do.”

In her book, The Bitch Switch, Omarosa explained that a woman in control—of her life, of her relationships, of her career— “determines her own rules of engagement for every situation.”

Still, it's unclear if the White House staffers have been able to locate her missing shoes.