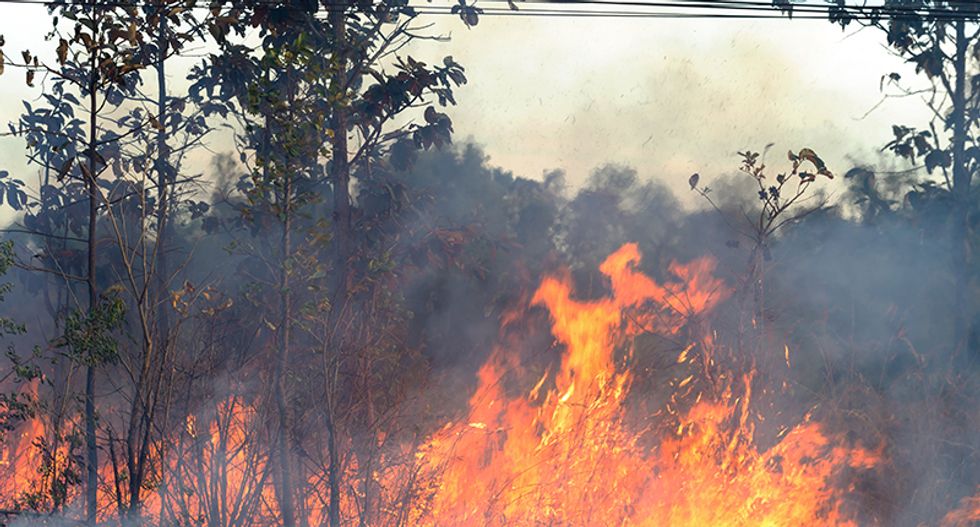 The 15-year-old teen being charged with starting Eagle Creek fire was reportedly throwing smoke bombs into the canyon. Smoke quickly rose up and other teens laughed, unaware it had just started a fire.

The Oregonian reported that the investigation took over seven weeks to trace the cause of the fire that burned more than 48,000 acres and cost over $20 million thus far.

"This is a trauma for him," boy's mother said in Russian. She did, however, acknowledge "It was his mistake."

The older brother of the church-going snowboarder admitted he was with the group hiking that day, but it was another witness who saw the 15-year-old throw the smoke bomb.

His mother refused to say more, fearing a backlash against her siblings, who are still in school. The $20 million "mistake" has prompted a discussion over whether the family should be held financially responsible for the damage.

Oregon, along with California and Montana, have suffered substantial fires throughout 2017, rippling through homes, killing livestock and melting key infrastructure.

A spokeswoman for the U.S. Forest Service explained that the hefty pricetag for the Oregon fire doesn't even include "things like $2 million to $3 million in lost business in the Cascade Locks." The area is a prime location for tourism and the fires took place during the peak of the season.

"The boy who started the Eagle Creek fire is a teen. Teens do this kind of thing all the time. It was a terrible human mistake," OregonLive quoted a Twitter commentator in October.

"To teen who allegedly started Eagle Creek fire: I hope you land in jail and bankrupt your family over your idiocy," said another commentator.

Since the teen is a juvenile and the police and district attorney have respected the family's pleas for privacy, there is little information known about him.

"I know, without a doubt, that this boy's parents have suffered psychological injury due to their son's actions," District Attorney John Sewell said in a statement to OregonLive. "This includes an inordinate amount of stress, anxiety and fear concerning the wellbeing of not just the accused, but also the other children in the family home."

The parents fled from the Ukraine in 2000, according to the mother. They attend a Pentecostal church in Vancouver that holds their services almost entirely in Russian. It's unclear if the hiking group included members of the church group, however, "it's not unexpected that the community would worry about the fallout from the fire." The Oregonian reported.

"People (in the church) are suffering, praying that it doesn't bring some negative consequences for all of us Russian-speakers," the pastor told The Oregonian. "We are travelers and visitors. We are not in our country. Of course, we are a little scared."

Pentecostals believe that doctors and health professionals are helpful but ultimately that God will heal them if they are sick. Women in the Pentecostal faith cannot wear pants, avoid wearing jewelry and makeup and don't cut their hair.