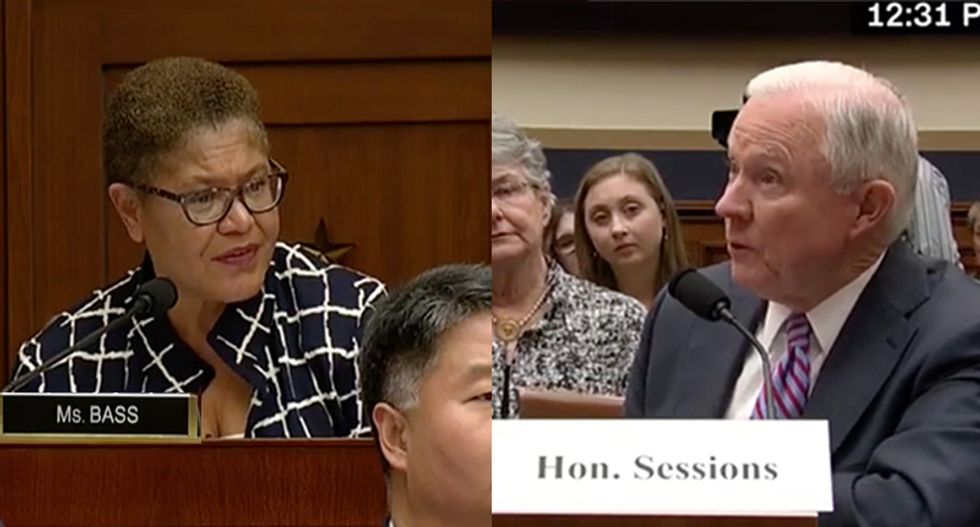 During yet another round of testimony and "clarifications" from Attorney General Jeff Sessions, Rep. Karen Bass (D-CA) blasted a report about so-called "black identity extremists."

She began by noting that between 1956 and 1971 the FBI ran a counter intelligence program initiated by former director J. Edgar Hoover that involved abuses of power. She then noted a new Justice Department report into that warned "black identity extremists" were likely targeting law enforcement officers.

"Who had the power in your department to order a report like this?" Bass asked. Sessions replied that he wasn't sure how the report got ordered.

"I don't believe I approved it or directed it," he said. He also admitted he is familiar with the idea of "black identity extremism."

"Can you tell me what it means to you?" Bass continued. "Do you believe there is a movement of African-Americans that identify themselves as black identity extremists and what does that movement do?"

He explained that he found it "interesting to see the conclusions" but that he knew there were groups with "an extraordinary commitment to the racial identity" that turned violent.

"You aware of white organizations that do this as well?" Bass asked. "Given the movements such as the neo-Nazis, are they white?"

She went on to ask if there was a similar report performed on those "white identity extremists," such as white supremacists and neo-Nazis. "You mentioned you were familiar with black people who identify with the racial identity."

He replied that he was but the details weren't coming to him at the moment.

"Not coming to you? Certainly a group such as the Ku Klux Klan," she commented. He agreed he knew of them as well of skinheads. However, Bass wanted to know if the FBI had done a similar report on "white identity extremists" who target law enforcement officers.

"I'm not aware of that," Sessions admitted.

Bass continued asking if Sessions had ever heard of the Sovereign Citizens, a predominately white organization that has targeted and killed police officers. Sessions said he wasn't exactly sure of their criminal history.

"I believe I could, but I would want to confirm that and submit it to you in writing," Sessions replied. "I believe we had within the last year or so four police officers killed by a group that some have described as extremists."

"So, what happened is there have been a couple of incidences in which African-Americans did kill police officers but were not associated with a black organization," Bass continued. "One, for example, in Baton Rouge, was associated with Sovereign Citizens, which is primarily a white group. There is a lot of concern in the community from organizations such as Black Lives Matter. By the way, would you consider a Black Lives Matter an extremist group?"

Sessions said he wasn't able to comment on it but that he hasn't declared it so at the Justice Department.

"You should know that a lot of activists around the country are concerned that we are getting ready to repeat a very sad chapter where people rightfully protesting what they perceive as injustice as a relationship with police officers are being targeted and labeled as extremists and going through periods of surveillance and harassment," Bass said. "What is your department going to do to protect the rights of average citizens to protest if they have a concern about police officers."

Sessions swore his department would not unlawfully target people. But Bass asked that Sessions review the report because "I don't believe they exist." She explained the organizations that are mentioned in the report are from decades ago. "I would like to know what will you do to essentially roll back what is listed in this report? It's not accurate."

Sessions said he'd look into it.

"They usually do an excellent job on those kinds of reports," he said.