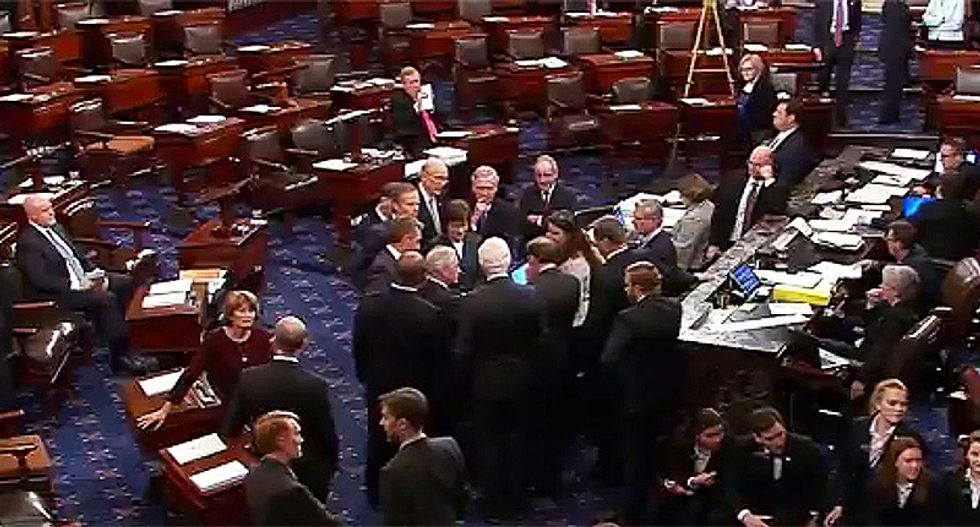 Late Thursday afternoon, Democratic senators attempted to send the Republican tax bill back to committee for further consideration and adjustments. Republicans rushed to the floor to vote and three senators who haven't decided whether or not to support the tax bill were brought to "the well" for a confrontation with the GOP leadership. But the real problem came when it was revealed the bill would skyrocket deficits at the cost of the president's own voters.

Sen. Pat Toomey (R-PA) and Sen. Bob Corker (R-TN) who have been "perennial GOP tax negotiators" according to Bloomberg political reporter Sahil Kapur "are now engaging in a back-and-forth as [Senate Leader] McConnell (R-KY) and his deputies hover."

"Corker is doing a lot of talking to colleagues on floor right now," Kapur reported via Twitter. "Vote's been open for a while. Something is up. McConnell/Thune chat in a sidebar."

Tax bill drama on the Senate floor. McConnell no es beuno while Corker talks to the other side! https://t.co/KYCG66Y8cS
— Jennifer Bendery (@Jennifer Bendery) 1512080577.0

Corker along with Sens. Jeff Flake (R-AZ) and Ron Johnson (R-WI) are the three members who were holding out on voting, but ultimately agreed not to put the bill back in committee. If they had, the bill might have been killed entirely.

Afterward, Sen. John Cornyn explained that the "deficit trigger" prevents the bill from being passed due to the senate budget rules. Reports estimate the tax bill would add a minimum of $1 trillion to the budget.

“It doesn’t look like the trigger is going to work, according to the parliamentarian. So we have an alternative, frankly, tax increase we don’t want to do,” Cornyn said.

Johnson told Kapur that he will continue to be a hold out on the bill to ensure he can offer amendments. He's not sure if the vote on the bill will occur Thursday or not.

“We just saw a kink in the time plan right there so who knows what other cogs might be put in this wheel,” he said Thursday night.

The New York Times reported late Thursday that Republicans are desperately "scrambling" to find revenue to fund the tax cuts.

The senate is in session until December 15, when they'll break for Christmas.