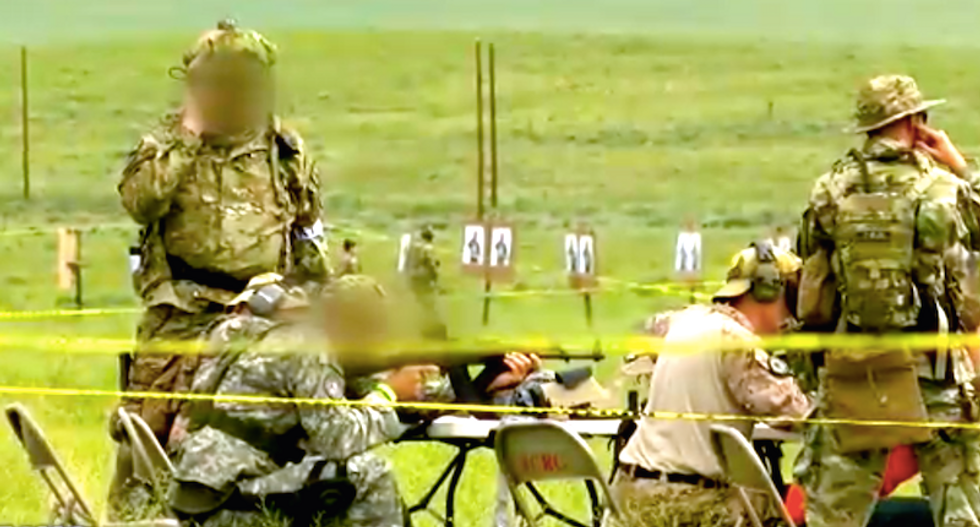 A local news report compared a Minnesota gun militia to squabbling reality TV stars after the group turned on its leader.

Jason Thomas headed the United Patriots of Minnesota 3% until his Red Wing home was raided by FBI agents earlier this year, reported KMSP-TV.

The FBI obtained a search warrant after Thomas threatened federal agents in a Facebook post, and investigators presented evidence to a judge that the "militia group believes in the violent resistance to or intended to overthrow the U.S. government."

“I can guaranty (sic) you that I’ll be one of the first to start killing feds," Thomas wrote in March 2016 on his social media account. "And am actually trying to build up our capacity to challenge them."

Thomas declined to comment on those remarks, but he told the TV station the 3% group -- one of many similar groups across the country -- was intended to "protect civilian population from man-made and natural threats."

The 3 Percenters are a loosely organized anti-government movement dating back to 2008 inspired by the historically inaccurate belief that 3 percent of the American population fought in the Revolutionary War.

Many of their views overlap with other right-wing "patriot" groups -- such as Posse Comitatus, Oath Keepers and sovereign citizens -- identified as potential domestic terror threats by federal authorities.

The Minnesota group, which claims about 400 members, takes part in training exercises to prepare for domestic unrest they see as inevitable.

“I think our country is possibly heading toward civil war,” said leader Joshua Raider, who took over as commanding officer. “I run into nuts here and there who try to join our group. You have to weed them out right off the bat -- obviously no one thought to check out Jason Thomas.”

A paid confidential informant told the FBI the group was involved in manufacturing untraceable AR-15 rifles by buying them in pieces and assembling them using homemade gunstocks -- which carry no serial numbers.

Thomas has a prior felony conviction for burglary and criminal mischief, and he was charged in state court with possession of a firearm by a felon.

Other members had been growing tired of Thomas and his leadership, saying the group's training exercises frequently devolved into "drunk fests," and they began to question his military background.

Thomas told other members he'd served in the 10th Mountain Division in Afghanistan, but that turned out to be a "flat-out lie," Raider said.

“His lies put us in danger with the FBI and the government,” Raider said.

The group elected a new state president this week, and they're in the process of "cleaning house" after removing Thomas.

"They see themselves as a militia, but they have more drama than reality show housewives," commented KMSP reporter Tom Lyden.

Ray Hartmann
The coordinator of the Buffalo Police Department's Crisis Intervention Team has been suspended without pay for allegedly making racist remarks, the Investigative Post reported.

Here are some of the statements that Beyer allegedly made, according to the Post:

Australia on Monday started building a vast network of antennas in the Outback, its section of what planners say will eventually become one of the most powerful radio telescopes in the world.

When complete, the antennas in Australia and a network of dishes in South Africa will form the Square Kilometer Array (SKA), a massive instrument that will aim to untangle mysteries about the creation of stars, galaxies and extraterrestrial life.

Belgium begins proceedings on Monday in its largest ever trial to determine whether 10 men played a part in the Islamist suicide bombings in Brussels in 2016 that killed 32 people and injured over 300.

More than six years after the attacks, presiding judge Laurence Massart will confirm on Monday the identity of all parties to the case, including the defendants and lawyers representing around 1,000 people affected by the attacks claimed by the Islamic State group.