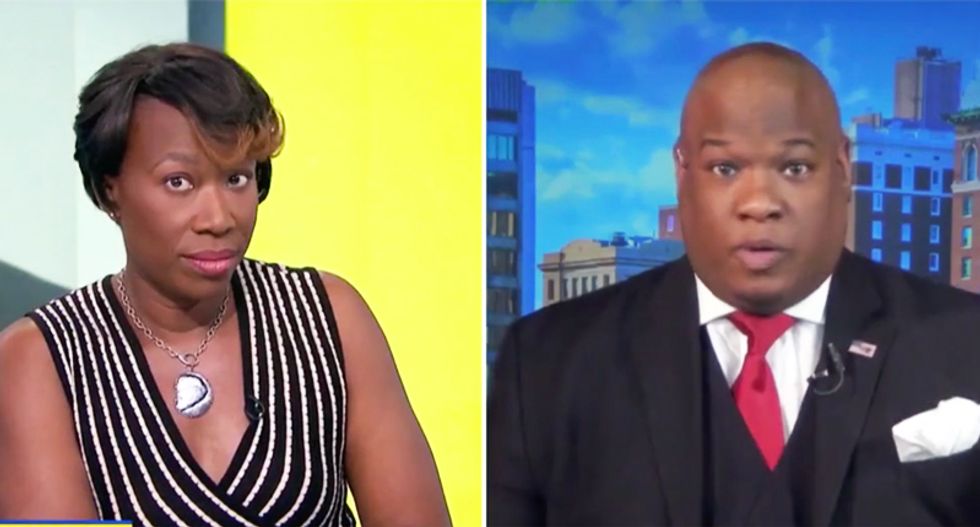 Appearing on AM Joy, Pastor Mark Burns of the Harvest Praise and Worship Center in South Carolina stunned MSNBC host Joy Reid by blurting out that "morality" is not a necessary quality our political leaders need to have as he tried to dismiss sexual abuse allegations against U.S. Senate candidate Roy Moore of Alabama.

During a panel discussion that was dominated by Burns alternately saying he believed Moore's accusers, but said the former judge deserved "due process" despite the amount of time before the offenses and the current campaign --  the southern pastor continued to defend Moore staying in the race.

"I'm not defending Roy Moore, I'm defending due process," Burns attempted. "I'd like to believe that if you were ever accused of something that you know that you did not do, you would believe people are treating you the same way that you would want to be treated if you were in that case, which is give you the benefit of the doubt."

"First of all, it is proven that the Gadsden Mall manager said that this story of him being banned from the mall is a false story," Burns stated -- which was disputed by the entire panel -- before he added, "You don't have to be accused of sexual morality. You can be accused of anything."

Reid wasn't having it.

"No, no, no, of sexual morality," Reid parried. "Do you know of any other man that you've ever dealt with who's been accused by nine different people or by any number of people of preying on them when they were teenage girls? You make it sound as if this is something that happens all the time."

"Well, I personally have never known anybody that has been accused of sexual immorality. But the thing that I'm saying is, we need to also understand, we need to be wise with due process," Burns replied. "W want all of our candidates to be moral, but morality is not the only qualification for leadership."

"Let me ask a question.," Reid stated. "As a pastor, do you counsel your parishioners that morality is not a necessary ingredient for leadership? Is that what you preach for your church? Because you just said it doesn't matter."

"You have just taken what I said out of context," Burns replied. "I did not say morality is not important."

"But immorality is not qualifying for leadership in your view?" Reid pressed.

"If that was the case, all of us would be disqualified," Burns explained.