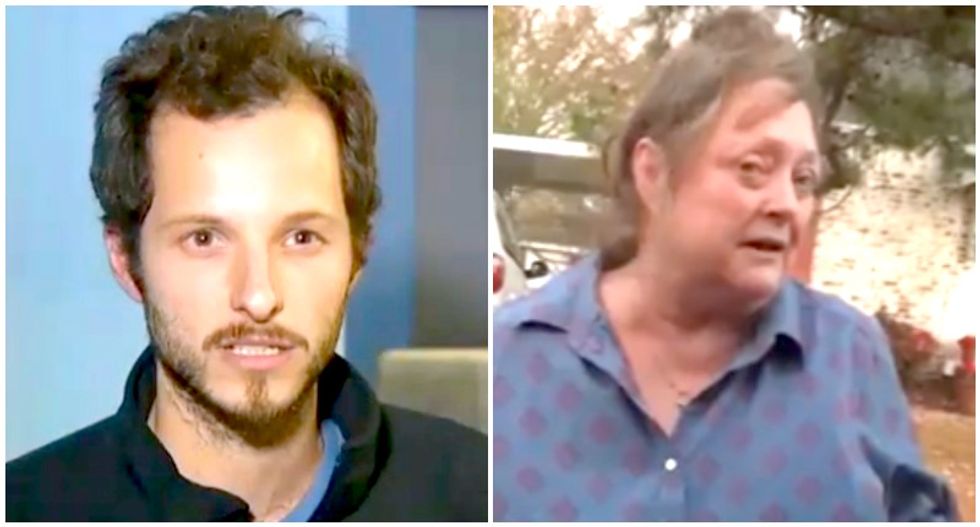 Morgan Casper and his neighbor (KOTV/Facebook)

An Oklahoma man said he's "heartbroken" that a neighbor called him out for supporting bigotry by backing President Donald Trump.

Morgan Casper started finding anti-Trump messages pinned to a pumpkin earlier this month on his front porch, so he set up a security camera to find out who was leaving the notes, reported KOTV-TV.

Another message suggested Trump supporters were complicit in the president's hateful attacks on some Americans.

"Not all Trump supporters are overtly racist, or ableist, or misogynist," the note read. "But every one of them decided hating people with brown skin or disabilities or women wasn't a deal breaker. Own that decision."

"I was very heartbroken because it's not who I am," Casper said. "I'm not a racist. I look at everyone as equal. I mean, my wife is an Indian, I'm white."

The Tulsa man caught the woman on camera placing the messages on his porch, and he hoped to confront her.

"It just breaks my heart that someone thinks that way of someone else that they don't even know," Casper told KJRH-TV.

He spotted her earlier this week while driving through his midtown neighborhood, and he pulled over and asked the woman about her signs -- while he recorded the encounter on video.

The woman at first denied placing the messages on his porch, but Casper said he had video evidence, and he tried to explain that he wasn't a hateful person despite backing Trump.

"I'm sorry if I come across as that, you don't know who I am," Casper said, and the woman agreed. "It makes me sad that you judge me that way, because it just breaks my heart."

The woman seemed to lose interest as Casper explained his political views, but he called her back to his car.

"There are things about Trump I don't like," Casper said. "I don't like that he goes on Twitter and says stuff very openly, I don't like some of the stuff he did in history."

The woman then asked why he'd elect a man like that to lead the country, but Casper changed the subject to Bill Clinton.

"He's a moron, all you have to do is listen to him talk," the woman said. "He has a vocabulary the size of a second-grader's. He's an evil piece of crap, and I'm scared. That's the only reason I would have done those things. I didn't key your truck or anything like that, I just wanted someone to tell these complacent ass wipes that they really screwed up -- and that's what I thought you were."

Casper granted her opinion but reminded her she didn't know him, but she pointed out he advertised his support for Trump with signs and bumper stickers.

"You said I was advertising that, like it's a bad thing," he said. "That's why America is America."

He said his support for Trump was no different than someone supporting Hillary Clinton and Bernie Sanders, and the woman explained her personal stake in politics.

"I just went on disability this last year," she said. "I live on a thousand dollars a month, and Trump is threatening that. It's not about their personalities or silly things they say -- it's life and death."