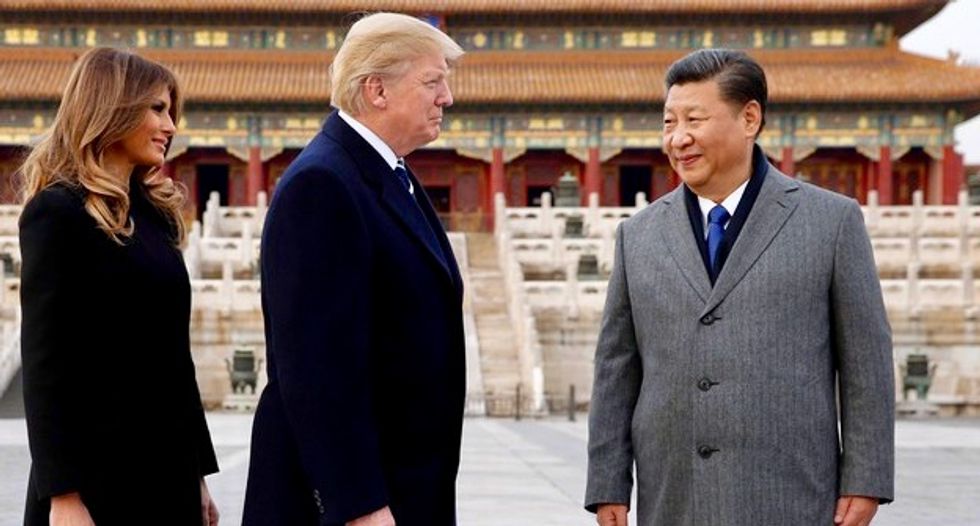 By Steve Holland and Christian Shepherd

BEIJING (Reuters) - U.S. President Donald Trump told Chinese President Xi Jinping on Thursday that he believes, like Xi, that a solution can be found to the North Korean nuclear issue, a day after warning Pyongyang of the grave danger of developing nuclear weapons.

Speaking alongside Xi in the Chinese capital, Trump also said it was disappointing that his predecessors had let the bilateral trade balance get out of kilter.

"But we will make it fair and it will be tremendous for both of us," Trump said, expressing respect for Xi.

Trump is pressing China to tighten the screws further on North Korea and its development of nuclear weapons. At least modest progress is hoped for, although there are no immediate signs of a major breakthrough, a U.S. official said earlier on Thursday.

Referring to Xi, Trump said: "I do believe there's a solution to that, as do you."

In a show of the importance China puts on Trump's first official visit, Thursday's welcoming ceremony outside Beijing's Great Hall of the People overlooking Tiananmen Square was broadcast live on state television - unprecedented treatment for a visiting leader.

Xi said he had a deep exchange of views with Trump and reached consensus on numerous issues of mutual concern.

"For China, cooperation is the only real choice, only win-win can lead to an even better future," he said.

Xi said China and the United States strengthened high-level dialogue on all fronts over the past year and increased coordination on major international issues, such as the Korean peninsula and Afghanistan.

"Relations between China and the United States are now on a new historical starting point," Xi said

Trump and Xi hit it off at their first meeting in April at Trump's Mar-a-Lago resort in Florida and continued their "bromance" on Wednesday with an afternoon of sightseeing together with their wives, followed by dinner. However, deep divisions persist over trade and North Korea.

And while Xi is riding high after consolidating power at a twice-a-decade Communist Party Congress last month, Trump comes to China saddled with low public approval ratings and dogged by investigations into Russian links to his election campaign.

Trump has ratcheted up his criticism of China's massive trade surplus with the United States - calling it "embarrassing" and "horrible" last week - and has accused Beijing of unfair trade practices, fuelling worries of increased tension between the world's two largest trading countries.

For its part, China says U.S. restrictions on Chinese investments in the United States and on high-tech exports need to be addressed.

More than $250 billion in commercial deals between U.S. and Chinese firms were signed during the visit, China's commerce minister said. Several corporate CEOs are in Beijing as part of a delegation led by U.S. Commerce Secretary Wilbur Ross.

Some in the U.S. business community have expressed worry that contract wins could come at the expense of resolving long-standing complaints over market access restrictions in China.

"This shows that we have a strong, vibrant bilateral economic relationship, and yet we still need to focus on leveling the playing field because U.S. companies continue to be disadvantaged doing business in China," said William Zarit, chairman of the American Chamber of Commerce in China.

Trump railed against China's trade practices during the 2016 U.S. presidential campaign and threatened to take action once in office. But he has since held back on any major trade penalties, making clear he was doing so to give Beijing time to make progress reining in North Korea.

A U.S. official said both sides are "in sync" about wanting to minimize friction during the visit and recreate the positive tone of the Mar-a-Lago summit.

Trump was not expected to put much emphasis in his talks with Xi on thorny issues like the disputed South China Sea and self-ruled Taiwan, claimed by China as its own, although the two presidents' aides may deal with those matters privately, the official told Reuters, speaking on condition of anonymity.

China has repeatedly pushed back at suggestions it should be doing more to rein in North Korea, which does about 90 percent of its trade with China, saying it is fully enforcing U.N. sanctions and that everyone has a responsibility to lower tensions and get talks back on track.

Trump used some of his toughest language yet against North Korea in a wide-ranging address in Seoul on Wednesday that lodged specific accusations of chilling human rights abuses, although he offered no evidence to support the accusations.

He also called on countries around the world to isolate Pyongyang by denying it "any form of support, supply or acceptance".

Chinese state media praised the tone of the initial get-together on Thursday, part of what China has promised will be a "state visit plus" for Trump.

"Trump seems to be pragmatic on his Beijing policy, and has no interest in ideological diplomacy. He hasn't used the issue of human rights to make trouble for China so far, and this means the Sino-US relationship can focus on substantive matters," influential tabloid the Global Times said in an editorial.