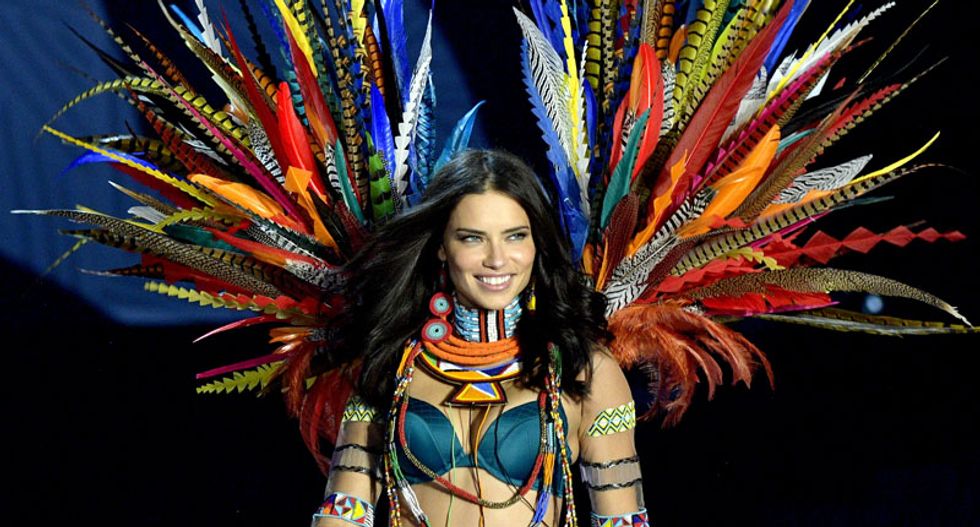 Much as artists, musicians and writers are influenced by the world around them, so too are fashion designers. The fashion industry has a long history of finding inspiration in the work of other designers and modifying them. But they also seek out creative ideas elsewhere, and often incorporate elements of cultures from around the world.

In most cases this goes unremarked, whether or not the style catches on. But sometimes creators cross the line between inspiration and appropriation when something important to a particular group is used in unwelcome, inappropriate or harmful ways, and without permission or recompense.

There is a long history of this among clothing designers. And Victoria’s Secret is once again at the top of the list. At their recent fashion show in Shanghai, lingerie-clad models strutted down the runway wearing a variety of Native-inspired regalia and accessories.

The show broadcasts on CBS on Nov. 28. On the Teen Vogue website, writer Avery Matera aptly summed it up: “The theme this year was cultural appropriation.” This is an all-too-common situation.

A short memory for cultural appropriation?

In 1999, in northern Canada, members of the Pauktuutit Inuit community became concerned when New York designer Donna Karan attempted to use the amauti as the basis for a new clothing line. The amauti is a windproof, waterproof parka common to the eastern Arctic and is very distinctive in design and manufacture.

The Pauktuutit Inuit Women’s Collective subsequently began to explore ways to protect their collective knowledge. Their goal is to develop a registry of amauti makers and traditional amauti designs, and then implement a trademark or other mark of authenticity. In response to a letter-writing campaign and other efforts, Donna Karan never released her own parka.

Urban Outfitters has long marketed clothing using the name “Navajo.” The Navajo tribe has not been successful in stopping much of the retailer’s use of the Navajo name.

And in a particularly egregious example in 2015, KTZ, a U.K.-based fashion company, marketed a clothing line featuring a parka (and other products) displaying traditional Inuit designs derived from a photograph of an Inuit shaman’s parka. Following complaints by the shaman’s great-granddaughter, who said the design was sacred and used without permission, KTZ pulled the clothing line.

When such situations arise, there is typically a strong public reaction. The product is pulled from market and the designers say they’ve learned their lesson. In many instances, the company says they were trying to honour the Indigenous culture but promises to be more respectful in the future.

But at Victoria’s Secret, someone has a short memory.

This isn’t the first time Victoria’s Secret has been called out on cultural appropriation. Five years ago, there was an outcry from Native Americans and others over a model wearing a feathered headdress on the catwalk. In response, a spokesperson for VS said: “We are sorry that the Native American headdress in our fashion show has upset individuals… The outfit will be removed from the broadcast.”

Why does this matter?

The line between appropriation and appreciation is sometimes obvious, but not always. Context is key.

Human societies worldwide have long borrowed from each other, with ideas and technologies flowing through time and place. The Romans copied the Greeks. Many of the foods that are staples of Western diet (corn, beans, tomatoes, potatoes) were originally domesticated by Indigenous peoples. Classical Greek architecture was used as the inspiration for the British Museum and countless other buildings. Jazz has emanated from African and other sources. There tends to be no harm in such borrowing.

For me, as an anthropological archaeologist whose career is very much focused on heritage, I draw the line when the use of an aspect of someone’s heritage is used without permission, or in inappropriate or unwelcome ways that cause cultural, spiritual or economic harm.

The harms are particularly acute for Indigenous peoples who, through loss of land, language and sovereignty, have had so little control over their own affairs in settler countries like Canada, the United States and Australia. Furthermore, legal conventions such as copyright, patents and trademarks are only rarely applicable to protecting their heritage.

• Diminished respect for the sacred

• Improper or dangerous uses of special or sacred symbols

Indigenous heritage is not pubic domain

What constitutes “heritage?” In Western society, heritage is very much about things and places of historical value. But a broader definition adds to this.

Heritage is the knowledge, customs, practices, stories, songs and designs, passed between generations, that define or contribute to a person’s or group’s identity, history, world view and well-being.

Heritage is thus complex, culturally variable and highly nuanced. There are substantial differences between Western and Indigenous societies. For many Indigenous peoples, heritage is entwined with all other facets of their lives.

A contemporary T-shirt with an ancient rock art image of a supernatural being on it may endanger the wearer because, from an Indigenous perspective, that being may be embodied in the design.

That is, there is no distinction between the tangible and intangible. And there may be little difference between the object itself and the information, stories, and other values that go with it.

A spiritual place cannot be separated from the stories and experiences associated with it. Ancestral beings may be part of this world or some other dimension.

It’s understandable that comprehending the often complex aspects of non-Western heritage is difficult. It is knowledge usually in the hands of Indigenous peoples or anthropologists. But there have been concerted efforts to protect and respect Indigenous heritage through public education, especially in relation to appropriation of Indigneous heritage.

The website Native Appropriations, developed and maintained by Dr. Adriene Keene, an Indigenous scholar, is one excellent source of information on this topic.

The Intellectual Property Issues in Cultural Heritage (IPinCH) project, which I directed for eight years, has also produced a wide array of resources to help educate researchers, policymakers and the public to help them make more informed decisions about Indigenous cultural heritage and intellectual property.

On our website you’ll find academic reports, community-oriented resources, almost 100 videos, podcasts and more that help to identify and explain how and why issues of cultural appropriation occur, what the social, cultural or economic harms may be, and how they can be avoided.

Our blog series, “Appropriation (?) of the Month” seeks out interesting examples and thoughtful essays on what and when something is an “appropriation,” a “cultural borrowing,” or something else. The answer isn’t always clear or simple; it is the reason we keep a question mark in our series title.

Indigenous peoples are proud of their heritage, and want to share much of it, but on their own terms. They want outsiders to have an accurate knowledge of their ways of life, past and present. But there are some elements that are not meant to be shared. And this should be respected.

Many consumers are drawn to the heritage and life ways of Indigenous peoples. But it is not always easy to discern what is and is not appropriate use. There are today a variety of sources that help to educate the public about cultural appropriation.

But there is no longer any excuse for Victoria’s Secret, Urban Outfitters and others to continue to act in unethical and socially irresponsible ways, especially when they’ve been caught at this before.

Now is a perfect time for us to move forward and away from this and to discuss with each other how to best avoid such mistakes in the future. As one way forward I’ve created a summary of the IPinCH guide for designers and marketers: Think before you appropriate.