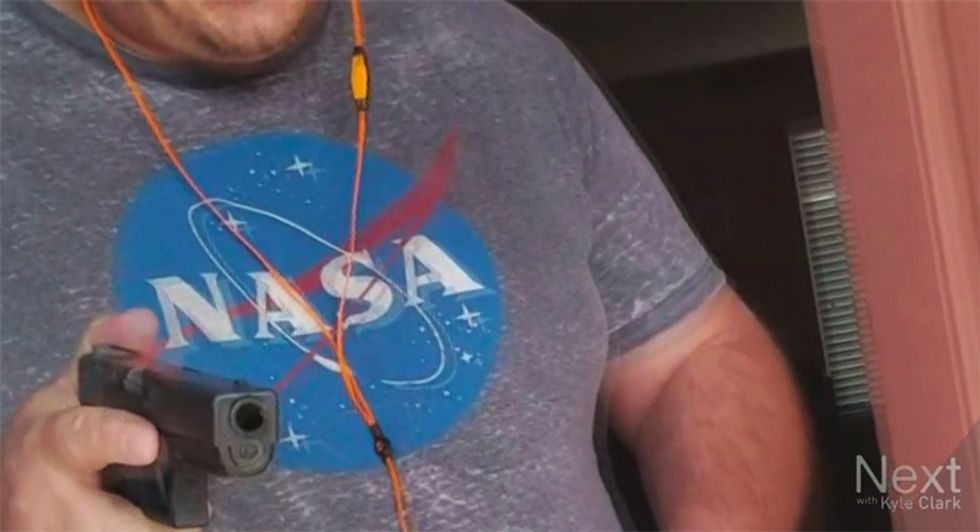 A Denver sheriff's deputy has been suspended after being charged with a felony for pulling a gun on a process server who was attempting to hand him papers seeking payment on an overdue bill.

In video provided to KUSA, Bret Martin Carbone is seen pointing a gun at Tom Mills after Mills knocked on his door and tried to hand him the legal documents.

According to Mills, he films all of his interactions as proof that he did his job, but was surprised to see a gun pointed out him.

“I don’t like going up to the houses in the afternoons and evenings anymore,” Tom Mills explained. “I’ve had people upset where they yell at you, call you names. But the physical part of bringing up a gun and holding it to you, I’ve never experienced that in my last 25 years. $150 is all he was being served for.”

In the video, recorded in two parts, Mills is seen knocking on Carbone's door who lies to Mills about his identity. After double checking the address and his information, Mills knocks on the door again, only to be greeted by a handgun pointed at him.

Informed by Mills that he was just being served with papers, Carbone threatened him saying, "You're going to put that down and get off my property. This is my property and I can do what I want!"

According to the report, Carbone -- who started working for the Denver Sheriff Department in January, 2016 -- was immediately put on administrative leave and has been charged with felony menacing for the Nov. 6 incident.

Carbone is due back in court on December 19.

Watch the video below via KUSA: