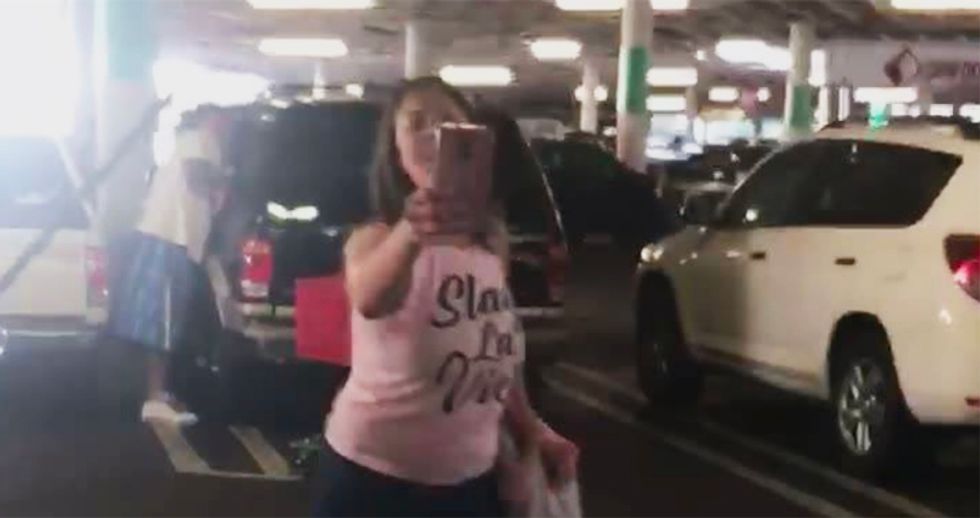 A model and registered nurse was assaulted and subjected to a racist rant in a Glendale, California mall parking lot after she looked up at a couple who rammed their shopping cart into her car.

According to KTLA, Quiggle Ignacio said she was sitting in her car having lunch when the cart belonging to the couple -- and containing a baby -- bumped into her car causing her to look up.

Writing on Facebook, Ignacio described what followed which culminated with her being swatted in the face by the mother of the child as she tried to film the couple.

"A lady pushing a grocery cart that has her baby in it hit my car so I looked at her and I dint (sic) want to go down because I thought I just wanted to finish my meal and I had it in my hands," Ignacio wrote. "I dint (sic) even get down to check damage I was just seeing if she would say anything I need to hear but she passed my car and started yelling ‘what are you looking at bitch? F*ck you chinky asian!"

In the video, Ignacio can be heard asking, “Why are you yelling at me? I should be the one yelling at you because you hit my car."

After being cursed with "F*ck you, you f*cking b*tch" Ignacio was then charged by the woman who grabbed her phone and hit her the face leaving an abrasion and swelling.

According to the nurse, the man came over and pulled his wife off of her before they got in their car -- but not before the women hid their license plate -- and drove off.

Ignacio then drove herself to a local police station where she filled out a report and was treated by paramedics.

On Facebook, Ignacio added, "I'm a good person and a hard worker, follow the law and take care of my patients like my own. There's no race or color that would change my service to them. I take care of them just like how I would take care of my family. I planned a good day and prior to that I was looking for electric wheelchair for my grandfather as a gift. What did I do to get hit on the face?"

You can watch the video below via KTLA: