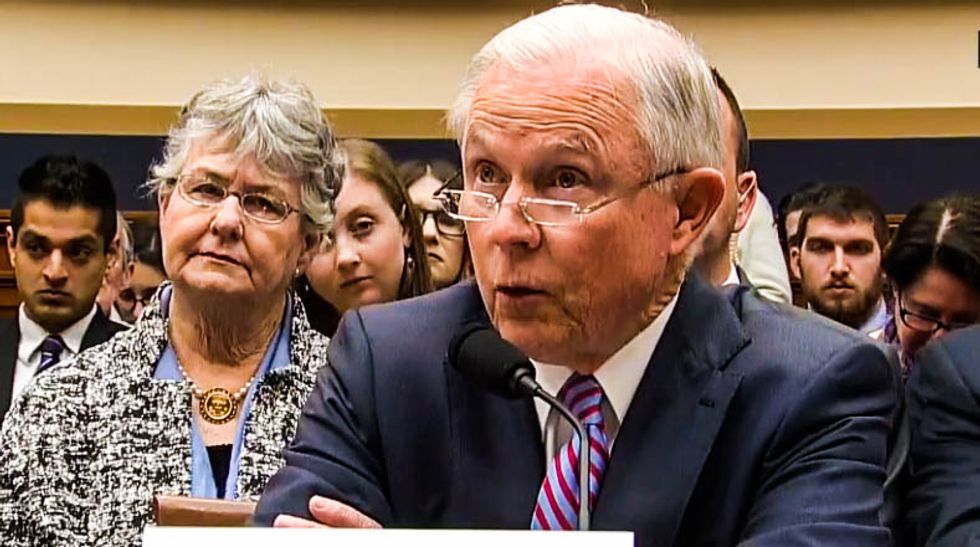 Rep. Sheila Jackson Lee (D-NY) grilled Attorney General Jeff Sessions on Tuesday about his failure to recall Trump campaign operatives telling them about their efforts to meet with Russian government officials during the 2016 presidential campaign.

During her questioning, Lee asked Sessions if he would like to amend his testimony, under oath, that he gave earlier this year in which he insisted he had no contact with any Russian officials during the 2016 presidential campaign, and that he knew of no efforts by people within the campaign to contact Russian officials.

"I would just say this, I stand by this testimony at the intelligence committee," Sessions replied. "I have never met with or had any conversation with any Russians or any foreign officials concerning any type of interference with the campaign or election in the United States. Further, I have no knowledge of any such conversations by anyone connected to the Trump campaign."

Sessions earlier testified that the "chaos" of Trump's campaign was responsible for him forgetting about a meeting in which Trump campaign aide George Papadopoulos had floated using his contacts within the Russian government to set up a direct meeting between Trump and Russian President Vladimir Putin.

In response to Lee's questioning, Sessions again insisted that he would have told the Senate about the Papadopoulos meeting if he had recalled it because the record shows that he had pushed back on the campaign aide's plan to set up a Trump-Putin meeting.

"I had not recalled that meeting when that occurred," he said. "But I would have been pleased to have responded and explained it if I recalled it."