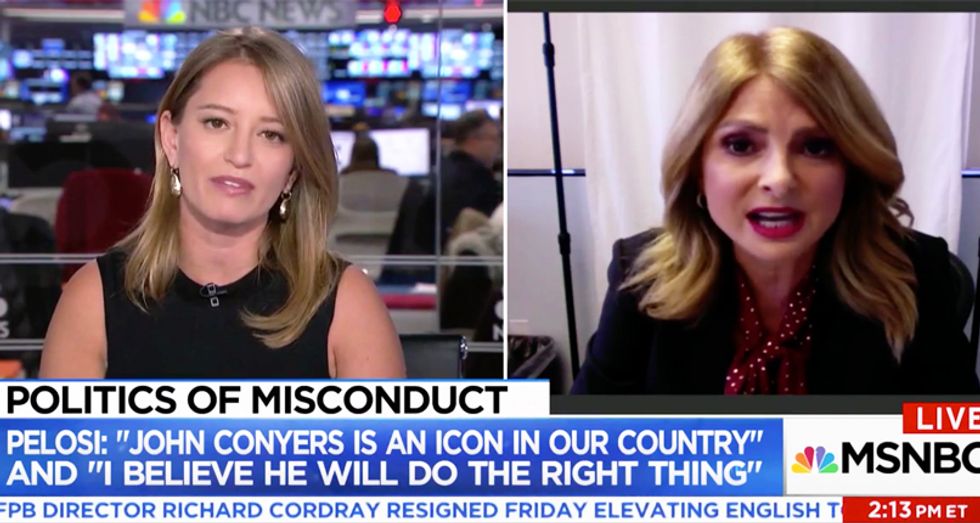 An interview with attorney Lisa Bloom went off the rails after MSNBC host Katy Tur questioned Bloom's credibility for defending Harvey Weinstein when she had a business arrangement with him.

Bloom is representing the unidentified woman who accused Rep. John Conyers (D-MI) of sexual harassment. As she attempted to explain that she could use a subpoena to pierce the confidentiality agreement the woman signed, Tur brought up Bloom's history with Weinstein, which included her assisting the embattled movie producer by digging up dirt on his victims.

"I would be remiss if I were not to ask you about your involvement with Harvey Weinstein, and allegations that you went to Ronan Farrow to give opposition research about his accusers, about Rose McGowan," Tur began as she quoted from an article in The Daily Beast that also asserted that Bloom tried to "shakedown her client for advertising money on her morning show."

"My question to you, these allegations, how do they damage your reputation as an advocate for women?" Tur asked the stunned Bloom.

"So that question, with all due respect, was all over the map," Bloom parried. "It was not about Weinstein but a different client---."

"So you never did that?" Tur asked.

"I absolutely deny that. And unfortunately I cannot talk about Weinstein because I'm no longer authorized to talk about Weinstein," she said trying to cut off the line of inquiry. "With regard to the other allegation that you brought up, there are e-mails to substantiate that."

"Look, here's the bigger question," Bloom attempted. "Over the 31 years where I've represented victims, have I occasionally represented some men who were accused? Yes, I have. Most who do this work do a percentage of their work where they also represent accused men -- they're entitled to lawyers as well. And what I have decided going forward is I'm not going to do that anymore, its not the best use of my time. But 99 percent of the cases I have done have been on behalf of victims."