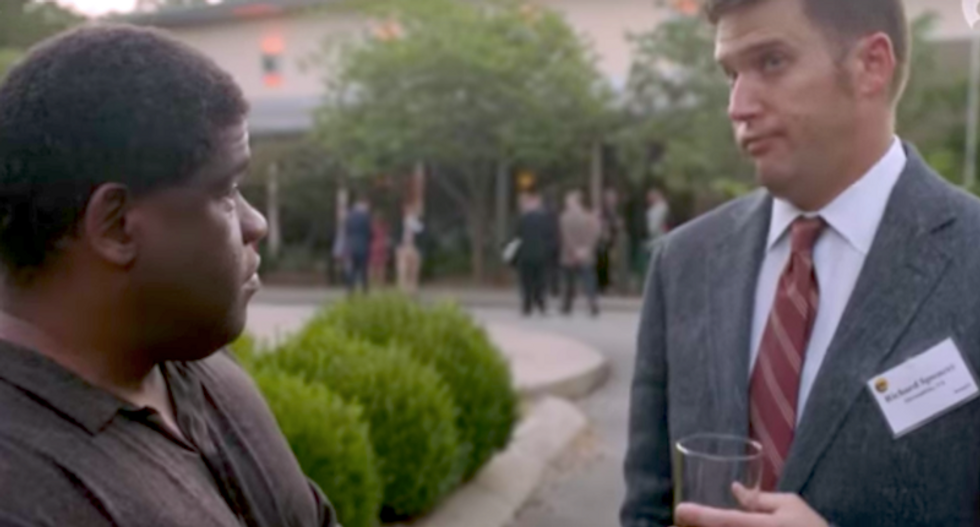 A British writer shredded racist claims made by white nationalist Richard Spencer -- who seems unprepared for a serious challenge to his viewpoints.

Gary Younge traveled from Maine to Mississippi for The Guardian over the summer to learn why American voters had turned from President Barack Obama to Donald Trump, and he spoke briefly with the face of the so-called "alt-right" movement.

"When I encountered Spencer at Montgomery Bell park, he emerged carrying a glass of what smelled like bourbon and an entourage of adoring bigots soon surrounded me in the car park," Younge wrote. "More odious troll than eloquent polemicist, he claimed, among other things, that Africans had benefited from white supremacy and that, despite having been banned from 26 European countries, Europe would always be more his home than mine."

An online video of their encounter shows Younge calmly challenging Spencer's claims point by point, until he abruptly ends the interview as a look of realization creeps over the white supremacist's face that he's been bested.

"Africans have benefitted from their experience with white supremacy," Spencer claims, and pauses a moment to gather his thoughts.

Younge tells him not to bother, because "that is not even worth challenging," and Spencer insists American blacks are better off than they would have been in Africa.

"So slavery was good for them?" Younge asks, and Spencer insists black Americans did benefit from historic slavery.

"How can you deny that?" Spencer says, sensing Younge's skepticism.

"It's such a ridiculous notion, that people forcibly removed from their homes and taken to this country to work for nothing, for a couple of centuries, that that benefitted them?" Younge says. "Have you ever for a second considered that if they were able to stay in the countries where they were born and lived, and weren't forcibly removed that those continents might be in a better state now?"

Spencer says he seriously doubts that possibility, and Younge challenges him to defend his racist pride.

“If Africans had never existed, world history would be almost exactly the same as it is today,” Spencer claims. “Because we are the genius that drives it.”

Spencer laughs off Younge's claims that his ancestors helped build Britain as slaves, and said that was as ridiculous as saying slaves built the United States.

"They did," Younge says. "They literally built the White House."

Spencer argues that only happened because white slave owners made them do it, and suggested the only "bad consequences" of slavery was the existence of African-Americans.

Younge dismisses his claims as laughably ignorant, and Spencer insists he's more of an Englishman because his name sounds British.

"The interview is over, you’ve got nothing to say," Younge says. "I was looking for someone who could give some intellectual ballast to what’s going on in this country in terms of race, in terms of white people, but I found the wrong guy. Because you don’t know what you’re talking about."