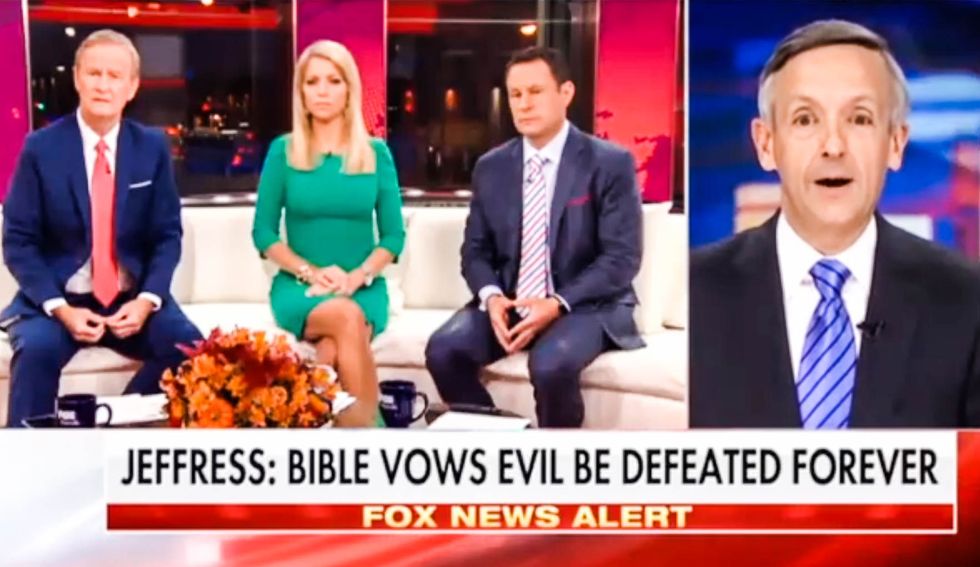 Conservative megachurch Pastor Robert Jeffress, who once claimed former President Barack Obama was the harbinger of the Antichrist and who once said he'd vote for Donald Trump over Jesus Christ for president, appeared on "Fox & Friends" Monday morning to talk about the horrific church shooting that occurred in Texas this past weekend.

During the interview, Jeffress said that having parishioners come into church heavily armed with guns was one way to prevent tragedies like the one that occurred at a church on Sunday in Sutherland Springs, Texas.

When co-host Steve Doocy asked Jeffress if it was common for Christian gun owners to leave their guns with them in their cars before going into church, the pastor replied that "it's certainly not common in our church" before going on to boast about how heavily armed his parishioners are.

"I'd say a quarter to a half of our members are concealed carry," Jeffress said. "They have guns and I don't think there's anything wrong with that."

"They bring them into church with them?" Doocy asked.

"They bring them into the church with them," Jeffress confirmed. "And if somebody tries that in our church, they may get one shot off, or two shots off, but that's it -- and that's the last thing they'll ever do in this life."