Watch Velshi & Ruhle bust Trump for claiming he's brought overseas jobs back: 'What jobs? Where are they?' 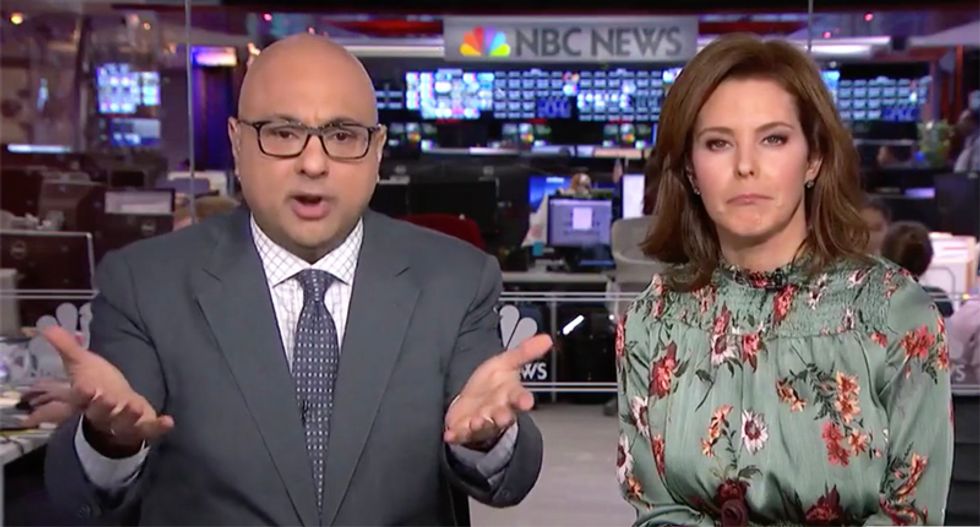 On Monday afternoon, MSNBC co-hosts Ali Velshi and Stephanie Ruhle called out President Donald Trump for claiming he's bringing  jobs back from overseas, saying they are both business reporters and would be interested covering those companies -- if the claim is true.

Referring to a Trump tweet stating he would be returning to Mar-a-Lago  after "quickly playing around of golf" for "talks on bringing even more jobs and companies back to the USA," Ruhle remarked, "Here is my question: Where are those jobs?"

"President Trump? Ali and I cover business and the economy, especially as it relates to politics every single day," she explained. "So where are these companies coming back specifically and not just pledges,  Foxconn may be coming."

"[Republican congressman] Jim Renacci said this the other day, from Ohio, the president's bringing all these jobs back. What are you talking about?" Ali Velshi excitedly interjected. "What jobs? Just tell me where they are. We'll go, we've got reporters, we'll find out what these are. We don't know about these."

"Please sir," host Ruhle said, addressing the president. "We're not being biased here. We would love to cover these and cover wins of this administration for the people in this country, specifically those forgotten Americans who are desperate for those jobs."

"We know jobs in general are being created, we give the president that every month," Velshi added. "Every month for all of our history, we talk about what the unemployment numbers are. While on his trip to Asia, the president tweeted, 'On November 14th, I will be making major statement from the White House upon my return to D.C. Time and date to be set.'"

"President Trump, we're all ears and those who say what about the thousands of jobs that get created every month? Guess what? Win lose or draw, they always get created," Ruhle stated, once again addressing the president. "Last administration, and they'll be created by the next administration."