'What the hell is going on?': Ex-evangelical goes on epic attack of GOP defending 'child molesting and Nazis' 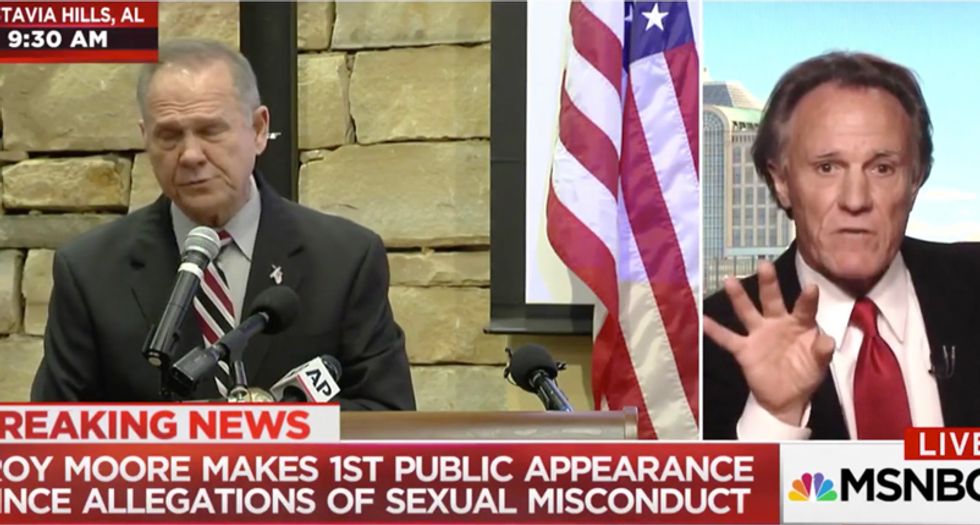 Appearing on MSNBC's AM Joy, former evangelical - and son a a famous pastor -- angrily tore into the Republican party for backing "rape, child molesting and neo-Nazis," in a furious broadside.

Speaking with host Joy Reid, former Christian evangelical Frank Schaeffer was clearly enraged at the continued candidacy of Judge Roy Moore who has been accused of sexually assaulting four women when they were in their teens and he was in his thirties.

Given a chance to unload on Moore, Schaeffer instead said he is just the latest manifestation of a Republican Party that has lost its way.

"Back in the day when my dad and my were going around the country establishing the religious right based on our anti-abortion stand, one I've moved a long way from since," Schaeffer explained. "The whole idea was bringing America basket to some moral stand."

"Think about the Republican Party now," he continued as his voice rose. "Throw some words out that are associated with them: mass shootings, Milo, Trump, Moore, Bannon, rape, child molesting, neo-Nazis, white supremacy. What the hell is going on with the Republican Party?"

"I'm not shocked by Donald Trump, he's an ass. I'm not shocked by Roy Moore. he's a loud mouth, a gun-toting fool," he exclaimed. "What I'm shocked by is the complicity. We are in a political climate that's built on one lie after another. I just want to say for the record, by the way, I believe a woman who stands up, which is very difficult to do and comes forward with a story like that. She was a Trump voter. She's a Republican."

"I believe her," he added. "I just want to say that as a father and grandfather and someone that respects women that I believe her."