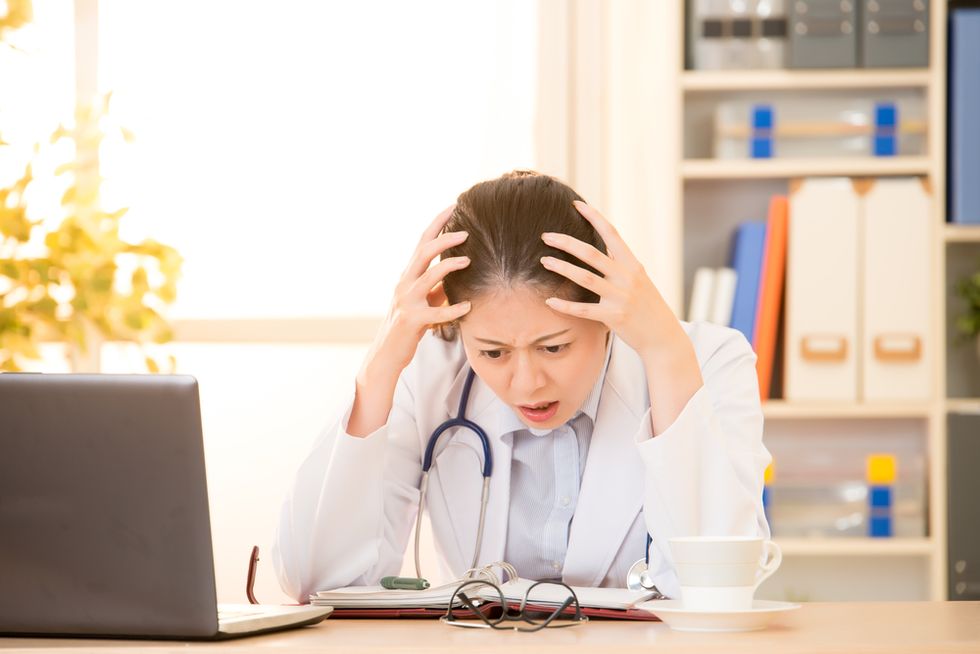 A frustrated woman wearing a doctor's coat sitting at a desk. Image via Shutterstock.

According to a November 15 memo acquired by The Kansas City Star, workers at the notoriously understaffed Larned State Hospital in Larned, KS were told that it is "violation of Kansas Department for Aging and Disability Services (KDADS) policy for staff to speak to the media and/or any legislators or to provide information to the media and/or any legislators without prior authorization."

Employees who spoke to the Star said the media portion of the policy was already in place, but the legislator part was new. They also said the policy "reflects an effort by officials in Topeka to hide the problems facing the facility."

“Employees need their jobs, so they basically intimidate them to not talk to anybody who could do anything,” one of the employees, who spoke on condition of anonymity to protect their job, told the Kansas City newspaper.

“They don’t want the truth out there,” the employee said. “They turn their reports in and tell the people at the top that things are going good, the staffing problem’s not bad… If they get the correct information out there, then they know they’ve got a problem.”

“You can’t stop people from talking to their elected representatives," another employee told the paper. "That’s basic civics 101."

As the report notes, the memo was sent the same week the newspaper published an investigation on Kansas government's "culture of secrecy."

"Larned has suffered from low staffing, forcing employees to work long hours," the report says. "The hospital, which serves patients with severe mental illness, accounted for nearly a quarter of the state’s overtime pay during the 2016 fiscal year, outpacing every other state agency."

According to the employees, Larned's understaffing issue has led to serious concerns on their end.

"The staffing shortage out there is really horrible," one of the employees said. "They’re just working astronomical hours."

KDADS Secretary Tim Keck told The Star that despite the wording of the memo, the policy isn't meant to restrict the speech of employees.

“I can promise you that we won’t discipline people if they talk to lawmakers," Keck said. "It’s about who has the right to talk on behalf of the agency."

The agency also said their secretary was unaware of the policy until the newspaper published their Thursday report on it, but Robert Choromanski, the executive director of the Kansas Organization of State Employees, said "that doesn't pass [his] BS meter."

"I don’t believe those state hospitals are going rogue," Choromanski said. "And I kind of find it ludicrous that Tim Keck doesn’t know what these state hospitals have done. This administration is very centralized. I find it very hard to believe that they had no role in crafting policies."