Alec Baldwin returns to SNL to face down 'Michael Flynn: The Ghost of Witness Flipped' 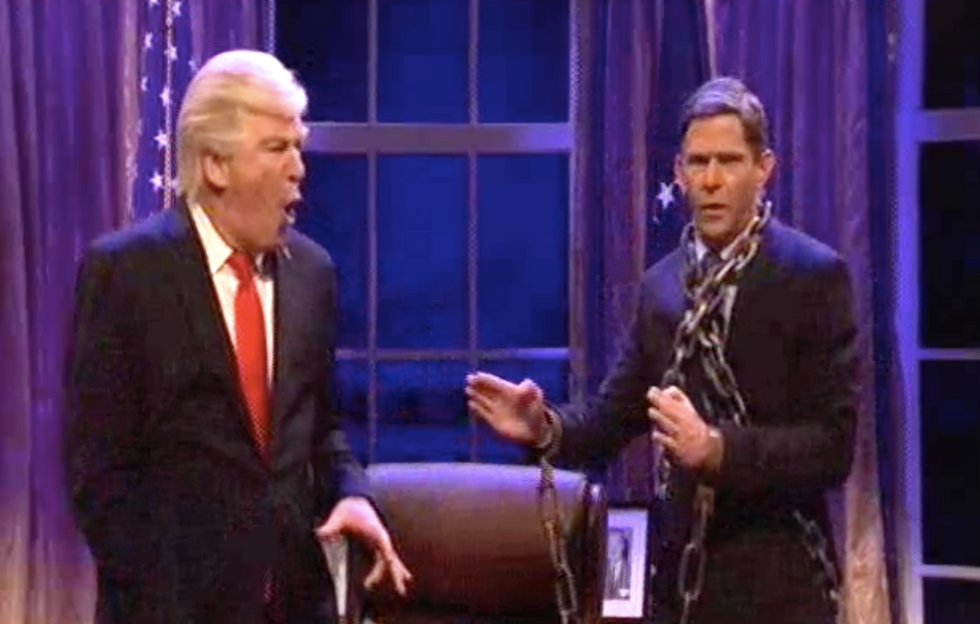 Alec Baldwin returned to "Saturday Night Live" this week to play President Donald Trump confronted with a parade of spirits in the style of Charles Dickens' "A Christmas Carol."

The sketch began in the Oval Office with Trump alongside Kate McKinnon as Kellyanne Conway trying to convince Trump to come down to the White House Christmas party.

Trump declined, saying the Mueller investigation is weighing on his mind, but he was shortly joined by cast-member Mikey Day as "Michael Flynn: The Ghost of Witness Flipped."

Flynn explained that the spirits have a message for Trump.

"You will be visited by three of them, here they are now," Flynn said.

First was Alex Moffat as Billy Bush, who lamented, "I got fired just for listening to you."

Trump drove him away, but not before Bush quipped, "If you worked at NBC right now, you'd be fired and out of money."

Next, Beck Bennett returned as Russian President Vladimir Putin, saying, "Donald you can't hide from me, I see and hear everything you do."

"Because you're a ghost?" Trump asked.

Flynn reappeared and said, "Don't you see, Mr. President, any one of these spirits could bring you down, but the scariest one approaches."

A shrouded figure approached, which Trump first mistook for Steve Bannon, but it was actually McKinnon as Hillary Clinton.

"You Donald, have given me the greatest Christmas gift of all," Clinton said, "sexual gratification in the form of your slow demise."

"You have no idea how long I've wanted to say this," she quipped. "Lock him up!"