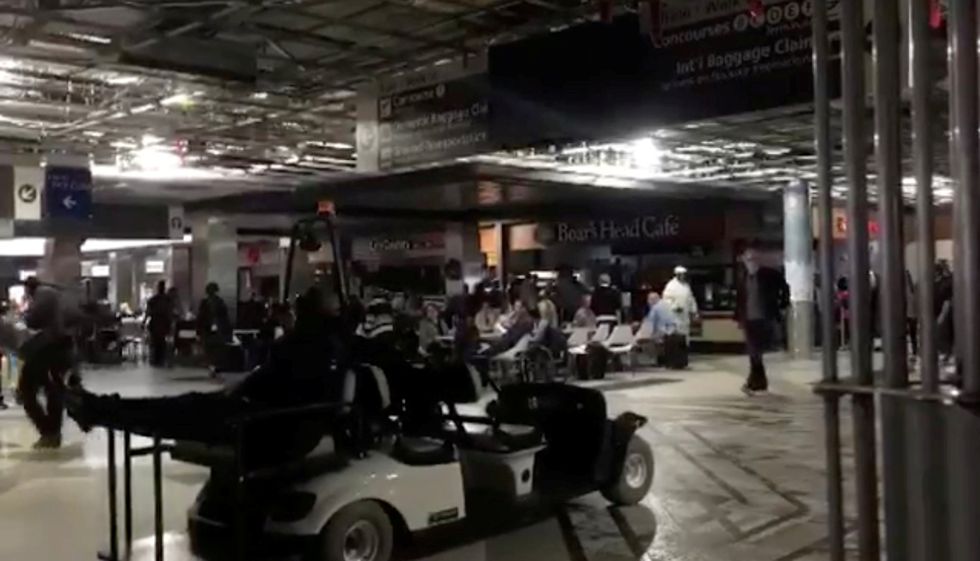 The Atlanta's airport is pictured during the power outage, in Atlanta, U.S., December 17, 2017 in this picture obtained from social media. INSTAGRAM/@APLINETREEE/via REUTERS

Hundreds of flights were delayed or canceled at Hartsfield-Jackson Atlanta International Airport on Sunday as a power outage left passengers at the world's busiest airport stranded in darkened terminals or in aircraft idling on tarmacs.

The partial shutdown at the start of one of the busiest travel weeks of the year forced the Federal Aviation Administration to hold back flights bound for Atlanta. Departures were delayed as well because equipment inside terminals was inoperative, the agency said. The FAA flight control tower was operating normally.

The cause of the outage, which occurred just after 1 p.m. EST, was not immediately known, the airport said in a statement. It was working with crews from Georgia Power to identify the problem and fix it.

In response, United Air Lines [UALUN.UL], American Airlines [AAMRQA.UL] and Southwest Airlines suspended operations to and from Hartsfield for the rest of the day.

"We know that today has been challenging to all of our customers traveling in and out of Atlanta, and we regret your disappointment," Southwest said in a statement.

"Stuck on a plane at Atlanta Airport as the power is out there ... bedlam inside and boredom out here!" Twitter user Jack Harris wrote.

Delta Air Lines said on Twitter it was working to allow customers to deplane as quickly as possible, with only a limited number of open gates available.

In response to a question from a customer, the Atlanta-based carrier said it expected service to be restored by Sunday night, although it cautioned that the airport had yet not identified the cause.

A representative of the airline, which operates a hub at Hartsfield, could not be reached immediately for an update on the status of its operations.

International flights to Hartsfield were diverted to other Atlanta-area airports, U.S. Customs and Border Protection said on Twitter.