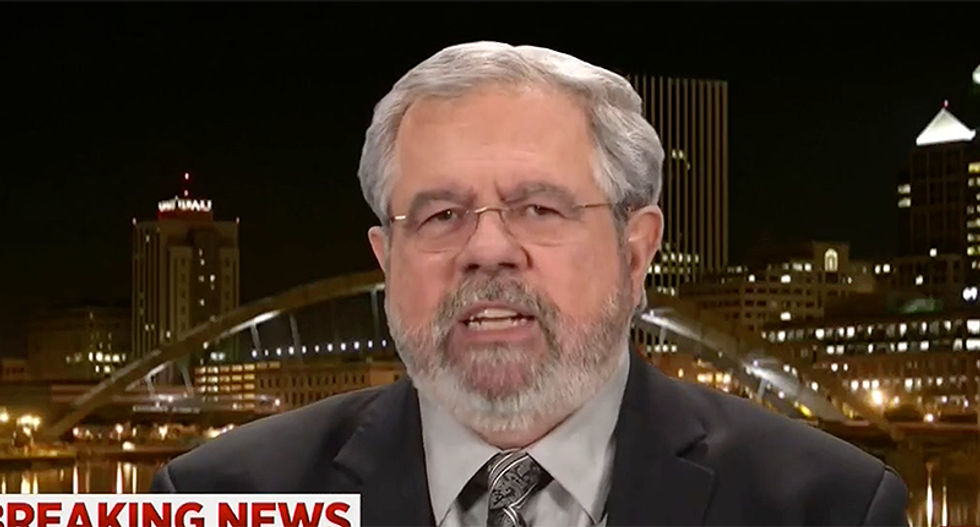 According to President Donald Trump's biographer David Cay Johnston, "the Donald" speaks in word salad, "because his mind is salad." Whether tossed, Caesar or chef, Trump's "salad brain" overflowed with narcissistic references to himself and his accomplishments during a 30-minute long New York Times interview.

"There's no focusing on any issue and knowing anything in-depth. It thoroughly establishes how Donald makes things up," Johnson said. "He doesn't know Jack about taxes. His own account, Jack Mitnick, told me that. I had lunch with Donald. He couldn't follow the tax advice I was giving him. He just makes stuff up."

Johnston noted that one interesting detail to come from the interview was that during the campaign, Trump "used what were massively inflated numbers to describe the trade deficit with China, the imbalance." In this interview, Trump mentions $300 billion annually from intellectual property theft. According to Johnston, Trump is essentially admitting that he made up the number.

In a panel discussion about the interview, that took place on the Mar-a-Lago golf course, Johnston and reporter John Harwood marveled at the multiple references to "me," "my" and "I" from the president.

"I think this interview is profoundly disturbing," Harwood said. "If you read it and think about it. The way the president speaks in such grandiose terms about himself suggests a level of delusion. 'I saved coal.' 'I was treated better than anyone in the history of China.' 'I did things that Ronald Reagan couldn't do.' 'The news media has to keep me president because the entire media system would fall apart without me.' This suggests a level of mental functioning which is not particularly acute and when he starts talking about the Russia investigation and he says 16 times 'there's been no collusion, absolutely no collusion, everyone agrees there's no collusion.' And some point you're just kind of babbling and this is the president of the United States and it cannot be reassuring to even people who support his policies to hear him speak in this way."

Harwood noted that Trump doesn't seem to be aware of what he's giving away in interviews liked.

"Anyone who speaks about himself in the kind of terms that he does, 'absolute right to control the Justice Department, 'I know more than the greatest CPA.' These are statements that are obviously cartoonishly ridiculous. And the fact that the president would feel free to say them to The New York Times suggests that he is not perceiving his own best interests or the interests of the white house."

Host Ari Melber recalled Trump's remark about being smarter than a CPA, saying, "it's not even a brag I'm that familiar with that people who have ascended to high office or being president would feel the need to go there."

"Well, Donald lives in this world where he creates his own reality and if he says it that means it's true," Johnston said. "And he's delusional. John is exactly right about this. Donald is delusional. I know -- I'm attacked by all sorts of people for saying this but he is. He is delusional and you are seeing his, you know, this manifestation of his belief. Donald, remember, believes and he's actually said at times he's superior to the rest of us. That, of course, he should be president. And you're seeing in this interview ridiculous and John had the right phrase: cartoonish statements about himself."

Johnston also noted that the interview shows how Trump is scared.

"His comments about [special counsel Bob] Mueller and the implication that if I don't think he's fair to me I'll get rid of Mueller one way or another goes to the heart of power unto himself."