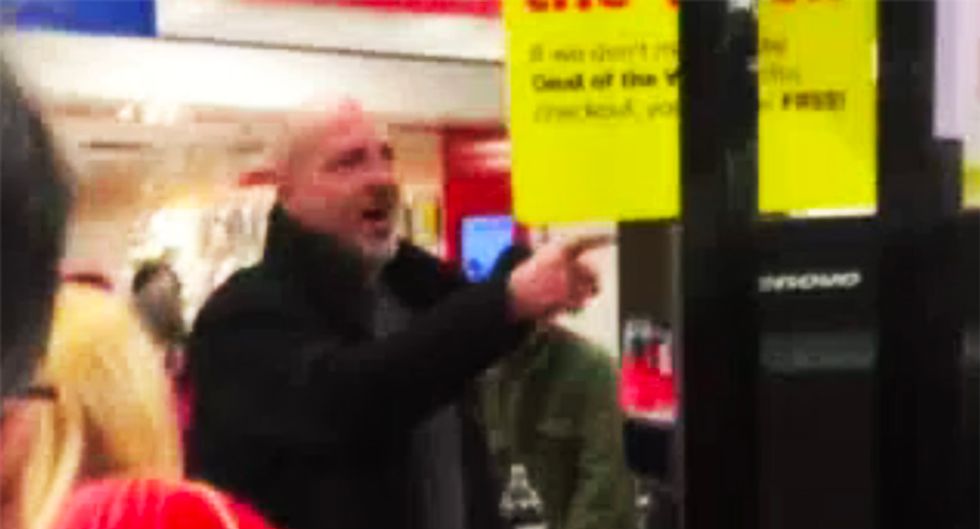 In a video posted to social media, a white man attacked a dark-skinned cashier at a big box store, accusing him of being a terrorist for making a clerical error.

Global News reports the incident occurred the Sunridge Superstore in northeast Calgary on Saturday afternoon as shoppers at the check-stand looked on in horror.

According to Steven Lemmon who filmed the incident with his cellphone, the verbal and physical assault began after a white customer grew angry over an item being incorrectly scanned.

“The customer was originally just irate at the fact that it was double-scanned and he wanted a manager,” Lemmon told the Global News. “Upon the manager getting there, it turned to a complete hate-fuelled tirade.”

In the video, the customer can be seen pointing at and cursing the employee while calling him a "bomb-making mother-f*cker."

As the store manager arrived and placed himself between the employee and the irate customer, another store patron intervened only to be shoved by the man.

“He then turned and faced him and words were exchanged. Then a massive two-handed shove to a citizen who wanted nothing to do with any physical confrontation inside of a store,” Lemmon recalled before adding that the shoved customer was not white.

“He avoided attacking back at people who were lashing out at him for the verbal attacks and the physical attacks. He relayed no message back to those people and continued the tirade on these two gentlemen," Lemmon elaborated. "So in my opinion, based on the words he used and the people he chose to attack, it was racially motivated.”

According to the report, police were summoned with a spokesperson for the Calgary Police Service stating that investigators took statements from witnesses and passed the information to the Hate Crimes Unit.

Watch the video below via Global News: