'Christmas is about Jesus': Pastor ruins Christmas for kids by telling them Santa isn't real 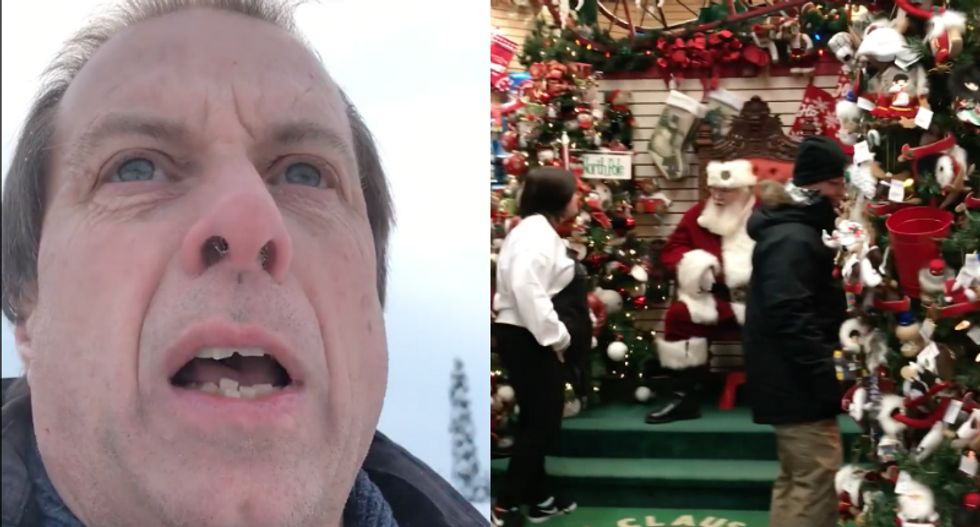 Not only did Pastor David Grisham, Jr. take to one of the most famous Santa Claus houses in the world to inform visitors that Jesus, not Santa, was "the real reason for the season" -- it wasn't even his first time doing so.

As Hemant Mehta at The Friendly Atheist writes, Grisham took to the Santa Claus House at the North Pole in Alaska to accost visitors about the falseness of St. Nick. He also did so last year at a Mall Santa event in Texas, and in 2010 posted a video of Santa getting shot by a firing squad with his group, Repent Amarillo.

"Jesus is the savior and was the one that was born on Christmas Day," Grisham said outside the Alaskan attraction. "That's what Christmas is about."

Grisham then enters the Christmas-themed house and starts filming his first-person perspective of his monologue.

"Hi folks, hi kids, my name is Pastor David, and I wanted to tell you guys that the real reason for the season for Christmas is about Jesus," he said.

"I wanted to tell you kids today too that Santa Claus does not exist," he continued, addressing a crowd that mostly ignored him.

He was then asked to keep his beliefs to himself by Santa Claus House staff and visitors before leaving.

You can watch Grisham's testimony on the truth of Christmas below.