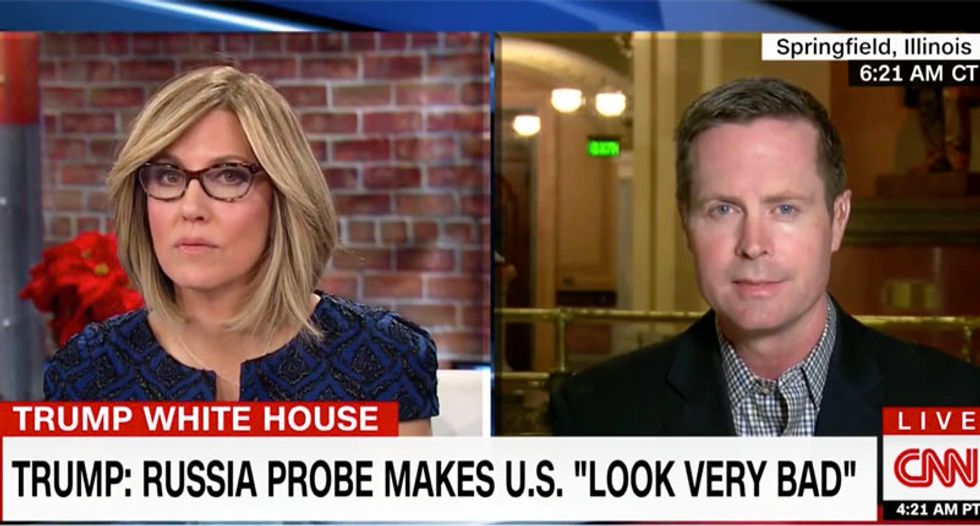 On CNN Friday morning, Illinois Congressman Rodney Davis (R) had a hard time coming up with an answer for why President Donald Trump has yet to implement any recommendations from U.S. intelligence services how to keep the Russians from meddling in American elections.

"I don't think the president means that the country is going to look weak on the world stage," Davis replied. "It is a blemish. We have one investigation, three right now, currently going on to address issues related to the last election. I think the president is clear in his distaste for the disarray that any investigation causes and I think he's right to say that."

"So what is the president doing to make sure the meddling by Russia doesn't happen again?" the CNN host pressed.

"Well, I think it's not just the president that is concerned about this -- all of us are, Alysin. As a matter of exactly what he said he was going to do, let's let the investigations play out," Davis attempted.

"What about the deterrence of Russia to not do it again?" Camerota continued.

"Well, there should always be deterrence. Let's take a step back and look at the last election. Remember, our elections are not held at the federal level. They are held at the level overseen by county courthouses just like the one here in Springfield, Illinois, where I'm at," Davis explained. "I don't believe anybody believes Russia hacked into each voting machine and had any outcome on the election. Frankly,  I think the outcome of the election is because many mistakes were made on behalf of the Clinton campaign and successes and strategies put forth by the Trump campaign."

"Listen, nobody says that the outcome was altered, " Cameriota shot back. "Since we know Russia meddled,  if you believe the intel, the president is sometimes so upset about the investigation into his campaign that he is not taking any steps to deter this from happening again. So what exactly is the president doing?"

"Well, I don't think the president should or could do anything because there is an investigation going on," Davis deflected.

"You don't think the president of the United States should do anything to deter Russian meddling?" the CNN pressed.

After Davis deflected again by bringing up Hillary Clinton and stating, " Come on, the American people are the one that chose President Trump," the CNN host again pushed him on Trump.

"I think you and I are talking about two separate things," Camerota lectured. " I'm talking about the intel agencies who put together sweeping recommendations of what to do; half a dozen specific suggestions that the CIA and others have said can be done to try to deter Russia who will try to do it again or currently trying to do it again. For some reason, the Trump administration hasn't acted on any of those -- why not?"

"I don't know how to answer that question," a clearly uncomfortable Davis replied before saying it should be the responsibility of American tech companies to halt Russian involvement.