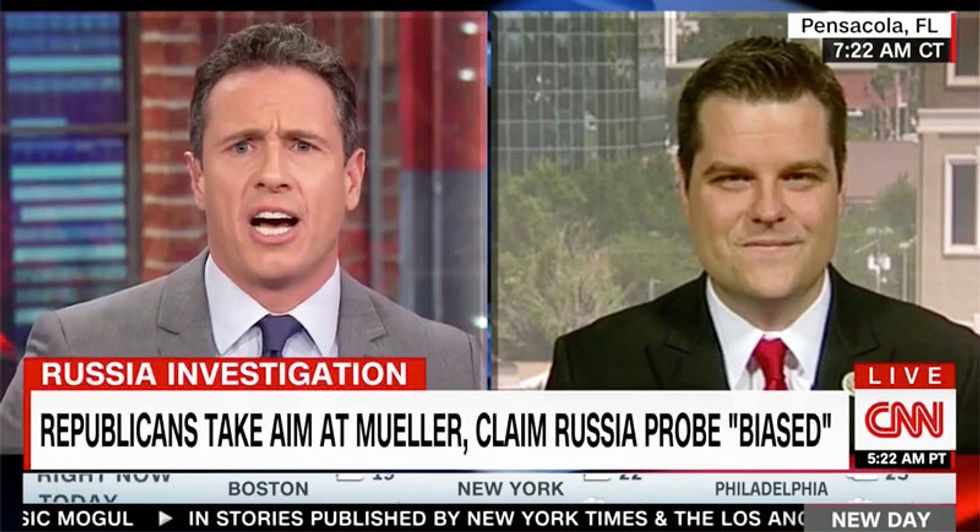 In a contentious -- and frantic -- interview with a Florida Congressman who is demanding that special counsel Robert Mueller be fired, CNN's Chris Cuomo dressed down the lawmaker by telling him Mueller has been a Republican longer than the young congressmen has even thought about be a member of the party.

According to Rep. Matt Gaetz (R-FL) the fact that Mueller wasn't re-hired to be FBI director was a telling factor that explains why he is out to get Trump.

Regarding Mueller's appointments to his investigatory team, Gaetz stated, "It is as if, when Bob Mueller picked his team, he went fishing in the never-Trump aquarium."

That was when Cuomo attempted to set Gaetz straight on Mueller's background.

"Bob Mueller interviews with the president considering a position in the administration," Cuomo lectured. "He has been a Republican longer than you have even considered being a Republican. He's a decorated war veteran who ran the FBI and who everybody in your party said is an excellent choice for the investigation. What has changed?"

"You made the point that Mueller was interviewed for his old job back, the FBI director position, and I think that's key fact," Gaetz explained. "On the 16th of May the president interviews Mueller and tells him he will not be the next director of the FBI."

"That's not our read on what happened. how do you know that's what happened in that conversation?" Cuomo asked.

"Well, look, I mean, you have got a situation where [Deputy Attorney General Rod] Rosenstein walks Mueller out and within 24 hours Rosenstein appoints him to be the head of the probe," Gaetz parried. "If he was being considered for the job back, the job he wanted, he would have gotten it."

"Hold on a second, don't overpower me with your, you know, your wisdom of loquacious attacks," Cuomo retorted. "If Trump didn't like Mueller, okay. You are saying you had this meeting, you are not getting the job and you don't make the grade, and then right after it the guy that he appoints to head up what is happening in the DOJ picks him? The same guy he leaned on for this memo about why Comey had to go? That same guy just stabs him in the back?"