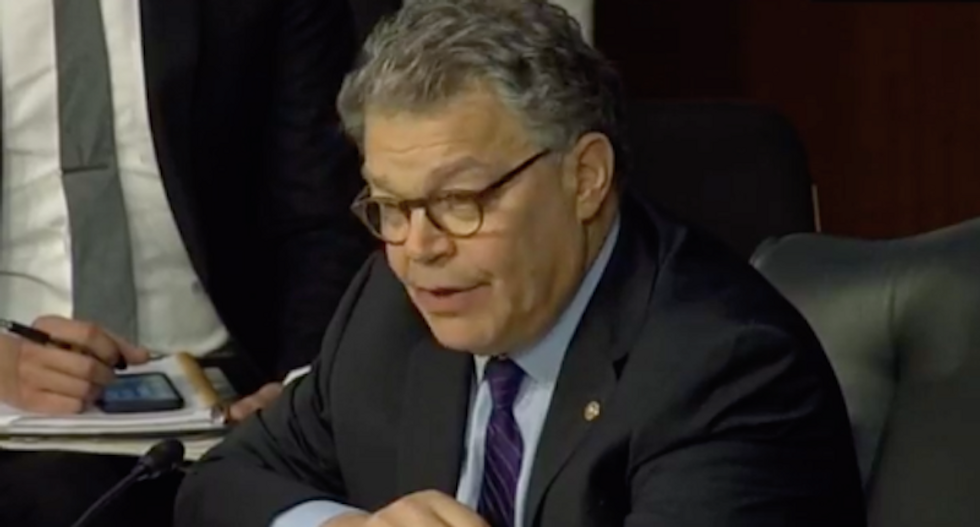 Former Minnesota Gov. Arne Carlson (R) has called on Sen. Al Franken (D-MN) not to resign his Senate seat over sexual harassment allegations until he can receive "due process" from the Ethics Committee.

The Star Tribune reported that Carlson's remarks were made in a Sunday posting on his blog.

"Being a victim can be painful but the answer to an injustice cannot be to create another injustice," Carlson writes. "I am deeply troubled by the resignation of Al Franken and the complete absence of anything resembling due process."

The former governor points to reports that one of Franken's accusers may have been "coached" by Roger Stone, a longtime ally to President Donald Trump.

Now reports are surfacing that Leeann Tweeden, Franken’s prime accuser, may have been coached by Roger Stone, a major Trump operator. Since there was no vetting, we only heard her story. But there has been no explanation as to why she attended a USO event in 2009 honoring Franken and was captured on tape joking around with him. This is three years after she claimed to be traumatized by Franken.

She continued in 2011 with a tweet containing a photo of her and Franken together.

This is all very troubling. A rush to judgment is, unfortunately, all too human. But a rush to punishment is totally unacceptable.

Carlson contends that Senate Democrats forced Franken out because it was politically expedient at a time when accused child molester Roy Moore (R) is running to become the next senator from Alabama.

"It is time for all of us to sober up," he insists. "While I am not always in agreement with Senator Al Franken, I firmly believe in due process which is a cornerstone of our democratic way of living. Whenever in history we abandoned it, we severely damaged ourselves."

"The simple fact is that Al Franken has been the Senate’s most effective challenge to Trump and his subordinates," Carlson concludes. "The possibility of any rigging by Roger Stone and his associates should cause all of us to call for a rescinding of the Franken resignation and a prompt and thorough review of all allegations by the Senate Ethics Committee."