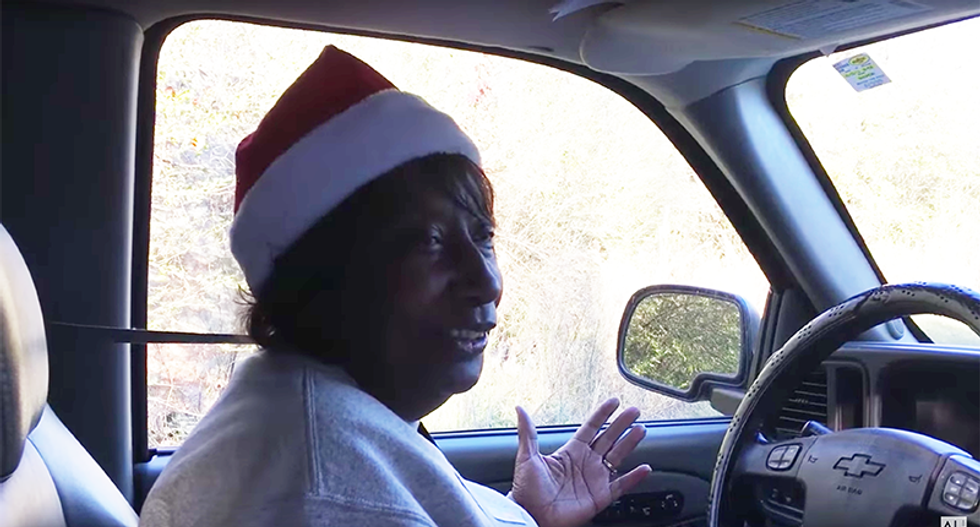 Perman Hardy was one of thousands of African-Americans who toiled on white men's land in Alabama over the years. She picked cotton after school as a child. In the years since, she finished her education and has worked as an in-home care nurse. However, her most lasting legacy is the time she has spent getting voters to the polls.

The 59-year-old woman has dedicated over two decades to trying to get every single voter in Lowndes County to the polls. Her county boasts 10,458 residents, most of whom are people of color. It's been struck with what Hardy calls "an epidemic poverty" and that's why she believes it's so important for people to vote, AL.com reported.

"That's my goal is to make sure everyone votes. That's always been my goal. This is what I do every election," Hardy said driving along wearing a Santa hat.

"I took some people today who've never cast a ballot before," she said of the most recent election between Roy Moore and Doug Jones.

Hardy typically spends more than 10 hours driving voters to the polls if they don't have transportation or can't make the drive without help. She personally drove over 50 people on Tuesday to polling sites in the county. Many of those she took were supporters of Jones, who contributed to the overwhelming support from the black community.

In Lowndes County alone, 3,779 people voted for Jones over a mere 988 for Moore, AL.com explained. Black voters were the deciding factor in Jones' win Tuesday. Not only did they outperform the expectations, they came to the polls in such high numbers that they out-voted their share of the population. It added to the fact that people of color overwhelmingly supported Jones to the tune of 96 percent, according to exit polls.

One of the people Hardy picked up was a pecan picker and then dropped him back off at work. She dedicated five minutes to convincing 79-year-old Jones voter Susan Mae Holcombe that she shouldn't worry about being dressed well enough to go vote at Collirene's Old Bethel Baptist Church.

"This is such a crucial moment. It's so crucial. You've got to vote," Hardy pleaded with Holcombe. "It will only take a couple of minutes; you'll be back in the house in 10 minutes."

She made it to the church and proudly cast her vote. She said she wanted Jones in office to help "kids go to school and have something for themselves."

She's spent time making sure students, who attend out-of-state colleges, can vote absentee and uses a portable scanner plugged into her cigarette lighter to scan their ID and Social Security cards. She's signed up people working the fields to vote.

At the end of the day, it allows her to look herself in the mirror, she told AL.com.

Watch the interview below and read the full interview at AL.com: