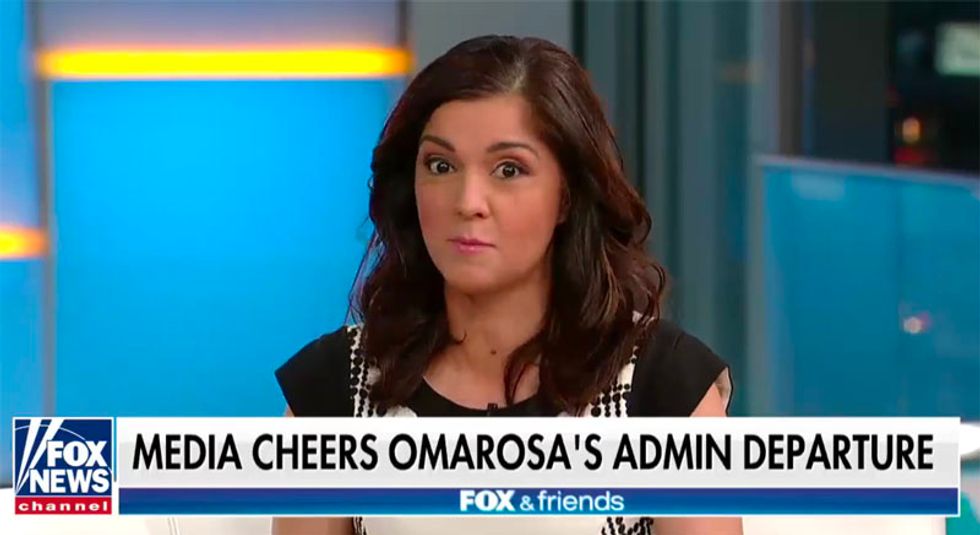 Appearing on Fox & Friends, analyst Rachel Campos-Duffy complained Omarosa Manigault Newman was the target of media "animus" after being booted from the White House because she is black and supports President Donald Trump.

Campos-Duffy, the former reality-show star who is married to Rep. Sean Duffy (R-WI), admitted that she had no insider knowledge why Manigault was either fired or  resigned as the Communications Director of the Office of Public Liaison for the Trump Administration, but that she did think joy at the controversial Omarosa's departure was race-based.

"She said she left, she's going to talk about it in her new book," Campos-Duffy explained. " I will say that the animus in the media, the way that the media has jumped in to talk about somebody who is, I mean she's not really a big huge ---."

"Why do they hate her?" host Steve Doocy blurted, cutting her off...

"She's a former Democrat, first of all, let's make that clear, she was on Al Gore's campaign" she replied. "She did support the president in a very strong way, and there is a very special punishment for minorities who are either conservatives or Trump supporters. So if you are a Trump supporter and you think you've had it bad, imagine being Hispanic or black. The punishment is so much worse."

Campos-Duffy later criticized Omarosa for her plans to write a tell-all book, saying it was unfair to candidates who are at their "most vulnerable" around aides during a campaign.