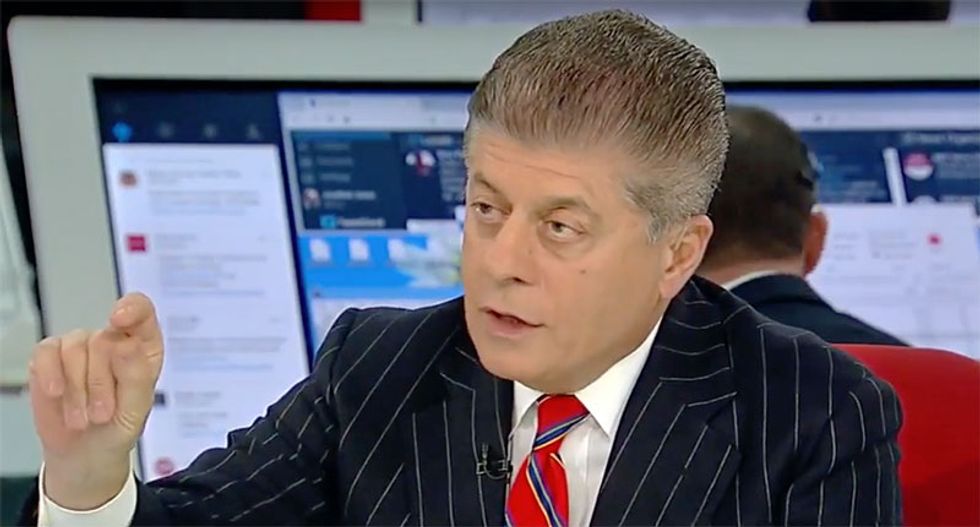 "It's been widely said Trump's lawyers believe this was illegal, this is a horrible thing happening," Fox News anchor Shepard Smith noted. "Which is ridiculous"

"When they ran the transition, the GSA, the Government Services Administration gave them the computers, the software and the server. And every time they went on those computers, every time you go in any GSA-owned computer, you get a notice, there's no privacy, the e-mail you send belongs to a federal government," Napolitano reminded.

"So Mueller's people either -- we don't know what -- knock on the doors and say you have the e-mails or got a subpoena. Perfectly legal and done every day of the week," Napolitano concluded.

"As a matter of course, to not get them would be derelict," Smith noted.

"Based on the evidence, who is in the line of fire now?" Smith asked.

"Jared Kushner, Donald Trump, Jr and the president is in the line of fire," Napolitano concluded.

"I'm critical of our colleagues that say there's no 'there' there," Napolitano admitted. "You know what, Shep? This is a jigsaw puzzle with 100,000 pieces and we see a piece here and a piece there and people say it doesn't make any sense. It takes time to amass all of these pieces of evidence so that we see the jigsaw puzzle completed, that's what Mueller and company are trying to do."

"Yes, yes. Look, General Flynn was exposed to 60 years in jail, if he was convicted of every charge out there and sentenced to the max. He's exposed to six months," Napolitano replied.

"How did he go from 60 years to six months? He must have given them something," Napolitano concluded.