Fox News whines about BuzzFeed article on white folk: They should be thanking us 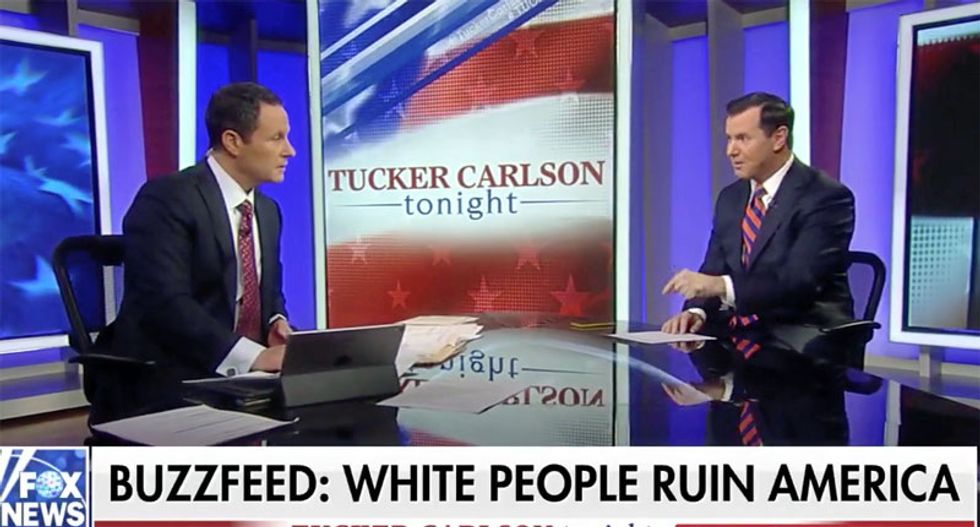 "What are they getting at?" Kilmeade asked The Hill reporter Joe Concha.

"They are getting at white people are bad for this country, cause one of them was white people voted for President Trump at a 58 percent clip as opposed to Hillary Clinton at 37, he's in office, therefore white people caused this," Concha explained.

In addition to ruining America, the list also suggested that white people were ruining macaroni and cheese, plus also ruining chopped cheese. And even ruining the Fresh Prince of Bel-Air theme song.

"Your floor director was walking me out here and he said because of the story, he stopped following Buzzfeed, he's not going to read it anymore," Concha claimed.

Fox News has been complaining for over 24 hours about the BuzzFeed article.

“Instead of hating white people, maybe Buzzfeed should thank them. The unemployment rate remains at a 17-year low, and the economy grew last quarter at its fastest pace since 2015. Minorities, including Hispanics and Blacks, are seeing historic lows in unemployment across the country,” Media Research Center Vice President Dan Gainor argued.

A BuzzFeed spokesperson told Fox News that it is “important to distinguish entertainment content from News."

"To legitimise their racism, the left has created a form of mental gymnastics that allows them to convince themselves that promulgating racist stereotypes about white people is somehow acceptable. You’ve probably heard the argument a thousand times by now; It’s impossible to be racist against white people because they hold institutional power," Watson argued. "This not only ignores the core unchanging definition of racism, it completely falls flat on its face when you account for the fact that the left is using its monopoly on the dominant cultural institutions (media, entertainment, Hollywood), to spew anti-white racism."