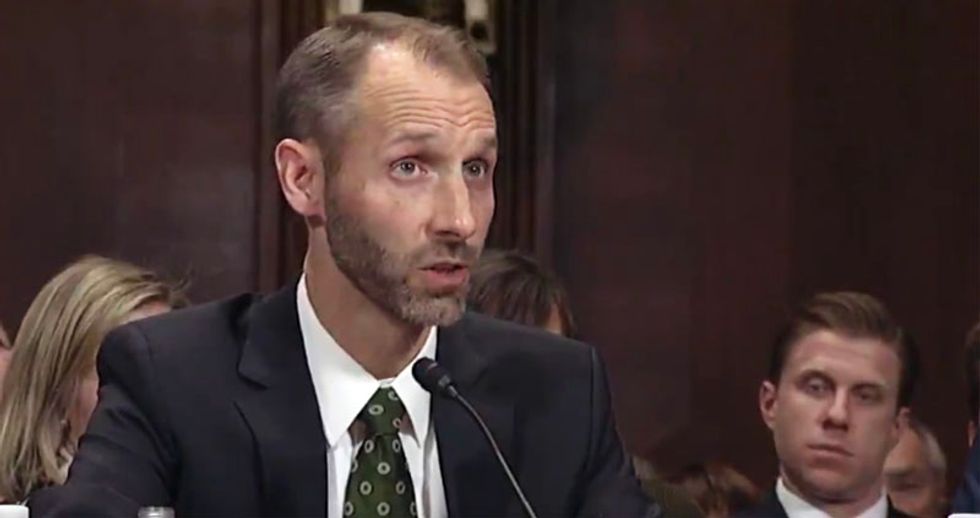 Democratic Sen. Sheldon Whitehouse (RI) took to Twitter on Thursday night to mock one of President Donald Trump's judicial nominees, posting a clip of a current member of the Federal Election Commission who has been nominated for a spot on the U.S. District Court for the District of Columbia.

In the tweet that begins, "MUST WATCH," Whitehouse linked to a clip of Trump nominee Matthew Spencer Petersen struggling to respond to basic legal questions from the Judiciary Committee, with the Democratic senator adding at the end at the end of his tweet: "hoo boy."

In the clip, Sen. John Kennedy (R-LA) pressed Petersen who finally had to admit he had never taken a deposition by himself or argued a motion in state or federal court.

Under further questioning on basic legal terms, Petersen demurred and was unable to answer, once stating, “Yes...my background is not in litigation,” before later attempting to get completely out of answering the question by saying, "I would probably not be able to give you a good definition right here at the table."

Asked about to two basic abstention doctrines, Petersen offered that he was aware of them but was unable to describe their applications on a federal court.

Followers of Whithouse were equally appalled with one writing, "I can't even. this is a joke. I was more qualified than this 'nominee' when I was a law clerk before I even passed the bar. Thank you for exposing this farce."

Another added, "This is like me applying to be a doctor. I've put bandaids on my children, taken temperatures, given ibuprofen, and comforted them when they're hurt it doesn't mean I could diagnose and treat people medically. Who applies for a job they're completely unqualified for?"

You can watch the painful video and some critical tweets below: