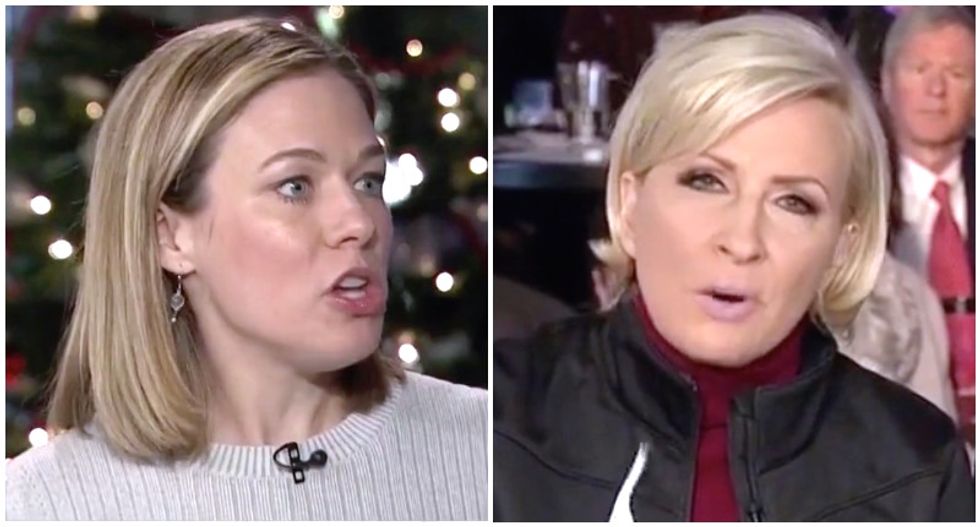 President Donald Trump implied a senator was willing to exchange sex for campaign contributions -- which left MSNBC's Mika Brzezinski and two other panelists "shaking in anger."

“Lightweight Senator Kirsten Gillibrand, a total flunky for Chuck Schumer and someone who would come to my office ‘begging’ for campaign contributions not so long ago (and would do anything for them), is now in the ring fighting against Trump,” Trump tweeted. “Very disloyal to Bill & Crooked-USED!”

Brzezinski read the tweet aloud before a live "Morning Joe" audience Tuesday in Alabama, and she and MSNBC contributors Katty Kay and Elise Jordan denounced the president and his enabling advisers.

"I just want to say something beyond the fact that is reprehensible that the president of the United States would say something so derogatory and disgusting about a woman," Brzezinski said. "We're not surprised, Mr. President, you do it all the time. You treat women terribly and you treat the women around you even worse. You treat women like punching bags because it's fun for you, because you are intimidated by women. That's your problem, OK, but for the people who work for you, you need to act. Sarah Huckabee Sanders, good luck today in the briefing. Don't lie, and do not defend the president of the United States for what he did. If you do, you have no -- you should resign."

Brzezinski said the president's implication was clear and unmistakable.

"Let's just say it -- he's suggesting Kirsten Gillibrand would have sex with him in order to get campaign contributions," Brzezinski said. "The president tweeted that this morning."

She and co-host Joe Scarborough called on the women working for Trump to make the president delete that tweet.

"Maybe it's Ivanka Trump, maybe she will finally stand up for what is right since her father just literally sexually harassed in a cruel way a woman on Twitter," Brzezinski said. "Ivanka, you stepped in there to talk for women, to speak for women, to have a platform for women. Where are you today?"

"It just makes my blood boil, it makes my blood boil," Jordan said. "Kirsten Gillibrand may be on the other side of the political aisle, but she's a class act, she's a brilliant woman, she's had a great career. She's an inspiration, and he's trying to silence her by insinuating, in parentheses, (she) would do anything -- it's so gross and beneath the office."

"It's obscene the implication coming from somebody who's in the Oval Office, and would do anything for them," Kay said. "The language is appalling, but he likes the fact that this then creates a bias. That's what is sick about it."

The panelists agreed Trump was clearly worried that his accusers coming forward Monday on TV had reopened the years-long sexual misconduct allegations against him.