LISTEN: Russian pranksters claim to have tricked Nikki Haley into defending the sovereignty of a fake nation 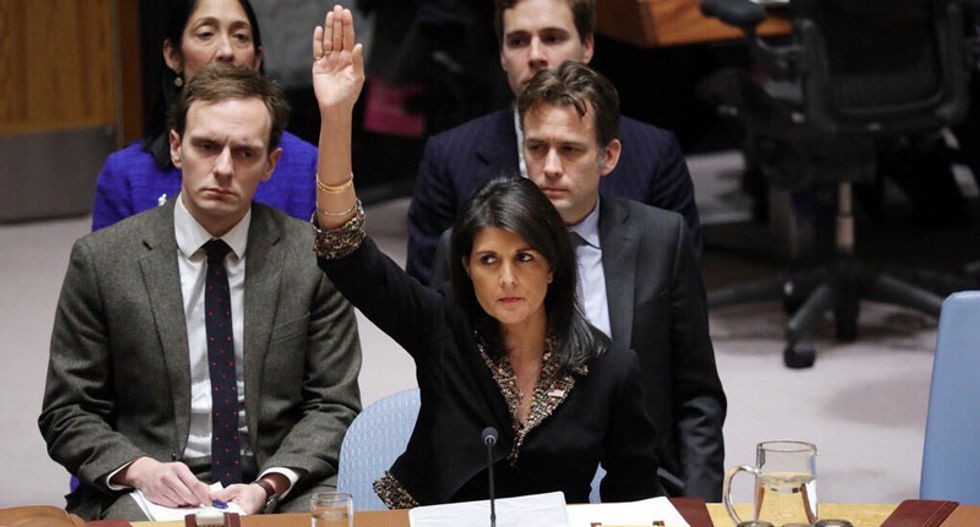 U.S. Ambassador to the United Nations, Nikki Haley, appears to have been pranked by two Russian comedians, according to a YouTube video published last week.

John Degory, a spokesman for Haley declined to verify the tape’s authenticity, telling the Post and Courier, "we have nothing to share on that at this time."

But the pranksters, Vladimir Kuznetsov and Alexei Stolyarov, maintain they called Haley and posed as the Polish prime minister during the nearly 30-minute long discussion.

In audio of the interaction, a woman who shared Haley’s strong southern accent can be heard thanking the “Polish prime minister” for abstaining from a vote against the United States during a meeting of the United Nations General Assembly last week.

"Let me start with very much thanking you for the support we received on the vote today,” Haley said, referring to the U.N.’s condemnation of the U.S.’s decision to move its Israeli embassy from Tel Aviv to Jerusalem,

“We will never forget it,” the woman added. That language mirrors what Haley herself told the United Nation, promising to “take names” of countries that voted against the U.S.

The pranksters also managed to convince Haley that a nonexistent island called Binomo was recently targeted by Russia during its nonexistent elections.

"You know Binomo?" the comedians asked.

"They had elections and we suppose Russians had its intervention," they replied.

"Yes, of course they did, absolutely," Haley said before offering to “find out exactly what our stance is on that, and what if anything the U.S. is doing or thinks should be done and I will report back to you on that as well.”

“We’re supposed to have White House meetings on all issues with the South China Sea coming forward, so I think we’ll have more answers at that time,” Haley added.

The U.S. ambassador added that the United States is able to “manage [Russia] and we continue to remind them what their place is,” a comment that drew criticisms from Russian press director Maria Zakharova wrote in Russian.

The comedians also steered the conversation towards more topical points of interest, including the sexual assault allegations levied against Kevin Spacey. The pranksters told Haley that Spacey once attended an official state dinner and “started to tap the knee of the president.”

Haley still didn't realize she was being pranked, saying she is interested in reading the interview.

Asked if she knows Spacey, Haley replied, "I don't know him personally but we certainly do hear stories.”

He then informed Haley that the former prime minister of Poland said she was "harassed by Mr. Trump in 2012.”

“She told me that. Maybe it's like, I don't know, it's modern to accuse people,” the Russian prankster said before suggesting the former Polish leader feels sorry for rejecting Trump.

"That might have been what was needed," Haley said. "We will leave it at that."