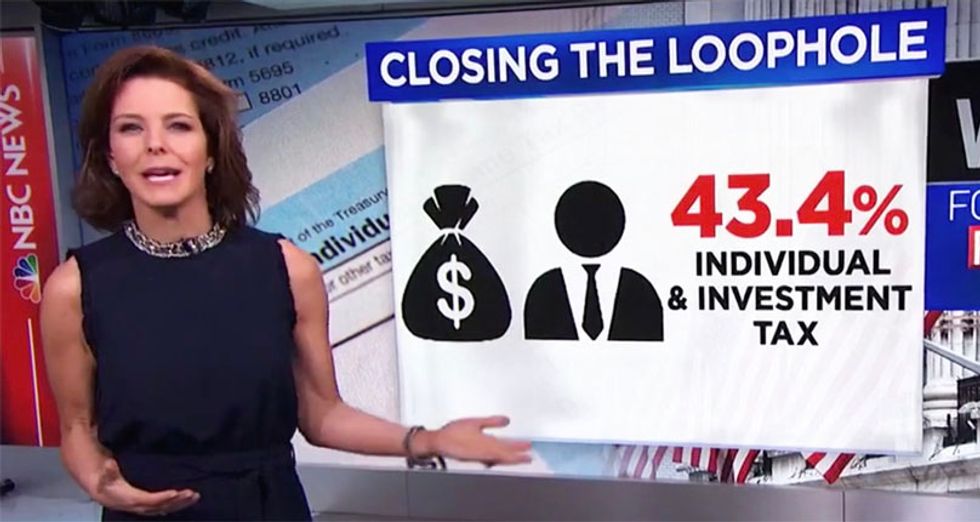 MSNBC host Stephanie Ruhle called out Republican lawmakers on Monday morning for their tax plan that contains an enormous loophole for Wall Street hedge funders -- a loophole, incidentally, that President Donald Trump vowed to close during the 2016 presidential campaign.

Along with her co-host Ali Velshi, the MSNBC business analyst challenged the GOP to dispatch a lawmaker to their show to defend keeping the carried-interest loophole that mainly benefits the rich, hedge fund managers and private equity firm employees. Under the carried interest rules, income from capital gains has a top rate of 23.8 percent, while ordinary income has a top rate of 43.4 percent.

The two hosts began by sharing clips of President Donald Trump vowing to get rid of the carried-interest loophole, once telling a Trump rally crowd that investors benefiting from the amendment to the tax code were “getting away with murder.”

Appearing on CBS on Sunday, Treasury Secretary Steve Mnuchin absolved Trump of responsibility for the GOP keeping the loophole.

"That was up to the House and the Senate," Mnuchin said on Face The Nation. "The president likes the overall bill and there's obviously little parts of this bill he would have tweaked differently himself. The president couldn't get every single little detail he wanted and that was one that got left out."

With Mnuchin laying blame on GOP lawmakers, host Ruhle challenged Republicans to send someone - anyone -- on their show to defend the continuing giveaway to the rich.

"So the only reason it would still be in is because big, big Wall Street money lobbied for it," explained Ruhle who once worked on Wall Street as a hedge funder. "We would love, Ali and I would love to invite any Republican who has an argument for why it should stay in there."

"Please explain it to us, our hearts and minds are open," she insisted. "Whether you're talking Mitt Romney, whether you're talking Steve Mnuchin, [Director of the National Economic Council and White House adviser] Gary Cohn. I'd love to understand why exactly this carried interest is left in there."

Following her challenge she walked viewers through how carried interest works and allows Wall Street employees walk away with huge profits, which you can watch below via MSNBC: